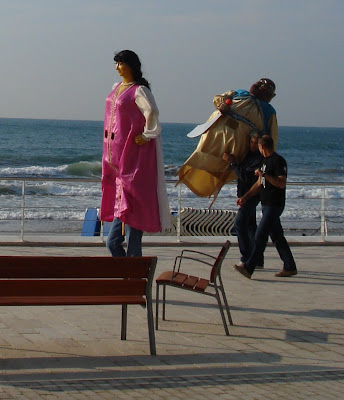 Before the fiesta.
.
I read today that there is an international agreement, which prevents scientists from replying to an extra-terrestrial signal, unless they agree that to respond is a good idea. This is apparently the work of an organisation called SETI (Search for Extra-Terrestrial Intelligence). Science fiction has flooded us with stories of extra-terrestrial invasions by usually sinister aliens. So such precautions are understandable. On the other hand, curiosity combined with a profound longing not to be alone in the universe, would be hard to overcome in the event of a signal being detected. But, where would the possibility of intelligent connections lead? World politics are bad enough. Imagine, as science fiction already has, the reality of inter-terrestrial politics. The only benefit of some sort of threat might be that the raggle-taggle human race might be persuaded to forget its squabbles and disagreements, and unite in defence of the Earth or what's left of it that is worth saving. For myself, I have always been on the look out for a signal and always will be.
.
The bay tree which we cut down in May is fighting back. The tree surgeons promised to poison the stump but forgot, and I was reluctant to remind them. But on returning from holiday we find the shoots at the side of the stump are threatening to become a bush and, before long, a light-excluding tree, so I set to work with the secateurs. There is no shortage of bay leaves. The aroma is heady and makes me think of casseroles.
Posted by Unknown at 3:35 pm

I love the eye holes in the belly of the maiden...hmmm...is there a poem in that?

I concur with you about the excitement of and desire for a signal from extraterrestrials. Watched an interesting animated film with grandson last evening, "The Battle for Terra." We humans were the bad guy invaders in this one.

I like bay leaf tea when my stomach is upset. A next door neighbor when I lived in New Orleans told my mother to give it to me for abdominal cramps. Can't remember if it worked, but I instantly liked the flavor of the tea.

We may perhaps have received the signal and not recognised it...

Told you the bay tree would rise again! Even poisoning the stumps doesn't always work, praise be.

Does bay rum smell of bay then?

Crow: I have bay leaves enough for plenty of tea. Will try to remember the remedy next time I need it. Would it help in the event of a visit from an et?

T Bay Rum was a horse, wasn't it? as well as something people put on their hair. So no headlice. I have no need of either a dead horse or the tincture.

L I am nut sure that I didn't have a signal early this morning, but I think on the other hand that it may have been the milkman.

I have a Proustian memory of bay rum. Perhaps an uncle in the distant past. I have always thought that the pong was rum rather than bay. I am now on Baywatch!