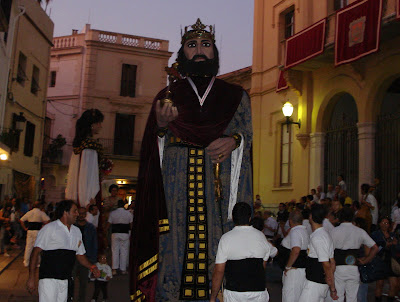 During the Fiesta of the local patron saint, Santa Tecla, on September 24, figures of "the King and Queen" and other characters are brought out of the town hall. There is dancing and raucous music, fire cracker explosions and a big parade through the town.
.
The previous night at 11 pm there is a fireworks display outside the church of Santa Tecla and Saint Bartolomew. We watch from our balcony as rockets turn into giant palms, which slowly unfold and collapse, the sky drenched in showers of golden seeds. The bell tower of the church stands out against a sky, which glows brightly from time to time like slow lightening, and fades in wreathes of smoke. To the sound of harmless but ear-shattering explosions, we think of that terrible phrase, "shock and awe".
.
Out friend Artur tells us about a mutual acquaintance, a Swiss man who married a local girl. He has lived in Sitges for a long time. Apparently when he was first married he complained that his wife's father, a prosperous man, rode about the town in ragged clothes in order to give the impression of being poor. Now many years later he himself is seen riding an old bicycle and looking as though he is barely above the poverty line, though we know that his wife owns a great swathe of property facing the sea.
Posted by Unknown at 7:34 pm

Might the man's wife be rich in assets but cash poor? It happens here...

Welcome home! Looking forward to more tales of your trip.

A brilliant photograph - I like the sense of scale and the light in the background. Enlarged there is a lot of detail.

An opportunity to refer to my "Oxford Dictionary of Saints" (a sadist's paradise, by the way). The first surprise is to find that St Tecla is a woman, a nun of Wimborne sent to help Boniface in his missionary work in Germany. Her connection with Sitges seems tenuous. I am also puzzled about the role of fireworks in revealed religions (or even unrevealed ones for that matter). But then the puzzles don't end there...

St Tecla/Thekla seems generally popular in more southern countries, I rather associate her with the Eastern Orthodox church, perhaps via Taverner? so it's a surprise to find she came from Wimborne. Unless it's a different one, or I'm wrong. I think it's a good name, though not quite as good as St Pantalaimon. I too have a Penguin dictionary of saints which is really ratehr a good browse.

I rather like these somewhat naive, boldly modelled saints' images they seem to use for these processions in Spain now, an improvement on the old counter-reformation effete kind of things one associates with the Catholic church.