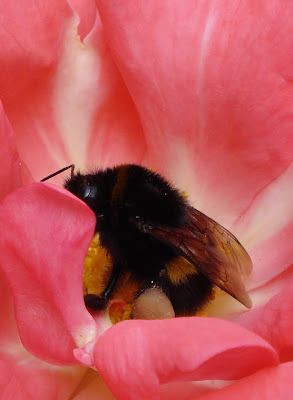 Today' bee in a pink boudoir.

An tall, elderly man emerges from a taxi outside Pasta Pasta in St Leonards-on-Sea, where we are lunching. He has difficulty walking across the pavement, but the woman with him, a little younger and plumper, helps him to a table outside. He has a moustache and a troubled visage. He wears a hooded woolen jacket, with the hood back. They order coffee, and sit facing one another holding hands. Soon his companion leaves and he sits on his own, his back to the sea. We go for a walk on the beach and when we return he is still there with another coffee. No sign of his companion. But now he is talking to himself.  He interrupts himself to order an ice cream. His tone of voice, when he continues with his conversation with himself, is serious and  sounds, and probably is, entirely rational.

After the vicarious experience of England's World Cup win yesterday, today it is tennis. As I walk up Mount Pleasant I stop  outside a tv shop to see that the match between the 6ft 9in American  John Isner and the spiky haired Frenchman Nicholas Mahut, carried on from yesterday, is starting again. The score is 60 - 59 in the fifth set (no tie-breaker applies in the fifth set at Wimbledon). On my way back twenty minutes later, the score is 66- 65. Neither player has yet succeed in breaking the other's service. The match has been in  progress, with an overnight rest,  for 10 hours  46 minutes of play. It is already  the longest tennis match ever at Wimbledon. When I get home a few minutes ago, the BBC website tells me that it is at last over. The score is 70 -68 with Isner the winner. The final time count for the match is 11 hours and five minutes. There is something unreal, heroic and completely mad about the whole episode, a piece of history. I am glad to have witnessed some of it yesterday evening and today.
Posted by Unknown at 5:46 pm

2 B the bee in that pink boudoir is 2 B delightful.

Especially as I am reading this post during
a torrential sudden downpour with window rattling wind. Yikes!

Gorgeous photo and what a catch!

You've mentioned St Leonards-on-Sea a few times. So that's fairly close by train to allow a nice day trip? Makes me think of the day we went to Brighton.

The old moustached man who has walked briefly onto the stage of your blog has left a lasting impression!

CC We could do with some of that rain here!

M-J St Leonards is a rahter down- at-heel place attached to Hastings. It is about 40 minutes direct train journey from Tunbridge Wells, the nearest sea. But we like it in its own right.