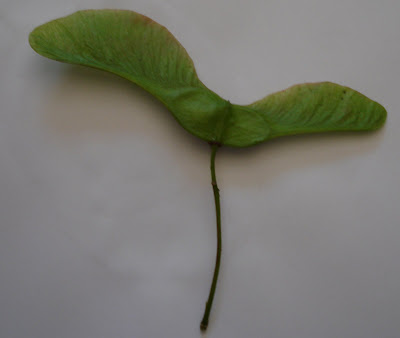 I usually photograph winged seeds like this maple seed in Autumn, when they are blown by the wind, and dry and brown and ready to start a new tree if they land in the right place. But this one, lying on the pavement, catches my attention because of its fresh green colour, which somehow enhances the veins on the wings and the gentle curve of the receptacle where the seed itself gathers the strength to procreate .

Glastonbury is not for me. But sometimes I wish that I had the capacity to join a throng. The group  called |Scissor Sisters has a song  called I Don't Feel Like Dancing. That is a sentiment I can sympathise with. I find it hard to join any kind of group activity in which the thinking, critical, sentient part of myself tends to be subordinated to a vast composite being, going who knows where, and wanting to drag me with it. I can, of course, see the attraction of giving in to it, abandoning, for a  while, thought, purpose, responsibility. This strikes me as I watch Scissor Sisters at Glastonbury on TV and the huge crowd swaying and bobbing up and down and dancing on the spot with arms waving in time. The sun is setting, the light golden. The faces are happy, ecstatic - to be young is very bliss - and for a moment I am happy for them, though glad not to be among them.

The football game between England and Germany is  just over with a resounding win for Germany. I like football too much to allow patriotism to intrude in my enjoyment of the game. Where football is concerned, it is tempting to agree with Dr Johnson who said that patriotism is the last refuge of a scoundrel. Most important, I watch the match with Heidi, who holds both a British and a German passport.  She likes football too. No question, though, England scored two goals rather than the one awarded,  the better team won and deserved to win.
Posted by Unknown at 6:16 pm

We totally concur about the football; England didn't deserve to win, and really if being robbed of that second goal didn't give them the motivation to try a bit harder, then being allowed it certainly wouldn't have made them play any better. And the German team was something to watch; I was especially taken with the goalkeeper... We're torn about watching the Germany-Argentina game, mostly finding it hard to stomach the thought of 90+ minutes of Maradonna.

I did a few stints at Glastonbury, 25 years or so ago, which is sobering to think. I wouldn't want to be there either now, but get the odd nostalgic twinge, probably false, as nostalgia is wont to be.

One the train today Hiedi pointed out some exhausted young woman looking positively in need of sleep and shower. "Glatonbury", she said. Or Blomfontein!