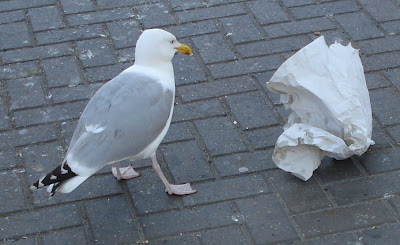 On the platform at St Leonards, Warrior Square, a seagull meets a greasy chip wrapper. Tomorrow: the  ensuing struggle.

In the train, a moth flies past my head and over the the seat facing us, where there is a group of four more seats. The seats are occupied but you cannot see by whom. All I see is a hand which shoots up and catches the moth. "Sorry", says an American voice, but whether the apology is intended for the people with whom the owner of the voice is travelling or to the moth I cannot tell.

The compartment in which we are travelling to Portsmouth is called a quiet zone. Signs beside the seats instruct: "Do not use mobile phones. Do not use earphones". Appropriate symbols - two circles with a phone in one, ear phones in the other, over each of which is printed a red cross -  reinforce the prohibition. Everywhere we look people are clutching their telephones as though they are fragments of the true cross. The girl opposite touches hers gently and an unintelligible sounds emerges from between her fingers. Across the aisle another young woman, sitting  directly beneath the notice, holds her phone in one hand and wears a set of earphones, from which emerges a sound like someone scrapping metal on a piece of glass.
Posted by Unknown at 7:36 pm

Soon we will have to pay for the privilege of being quiet. But this at least will allow us to invoke authority and punish those who spoil our expensive indulgence. A sad situation. The wrecked silence may never be retrieved.

Strange thought that one of the few areas of silence these days is on a train.