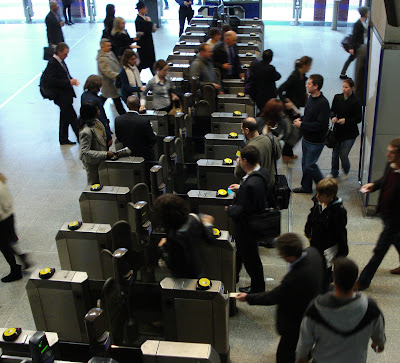 The automatic bus door closes just  as a young man arrives to board the bus. He stands in front of the door and makes a pleading gesture to the driver, spreading his arms. But the driver moves off. The young man begins to run on the pavement beside the bus up the steep incline of Mount Pleasant. Soon he overtakes the bus which is slowed down by traffic. By the time the bus, which  has been held up at the lights opposite the Town Hall, arrives at the next stop  the young man is waiting. He does not appear out of breath or triumphant. I find myself wondering whether he needs the bus at all.

A neighbour, whom I stop to  pass the day with sometimes, asks me if I am good at maths. He tells me the measurements of a tennis court and the speed in mph of the fastest serve, and wants to know how long it takes from the racket striking the ball during a serve until the ball hits the ground in the opposite court. I cannot help him though I have a few suggestions about how to tackle the problem. In the end I recommend another neighbour, Hedley Jones, who is both a maths teacher and an enthusiastic tennis player. Today the neighbour crosses the road to tell me that he still hasn't approached Hedley, but he remains worried because he has realized that the calculation must vary according to the positioning of the server and the point in the opposite court to which the ball is delivered. "Talk to Hedley", I say, "and you will surely be enlightened." But then I begin to wonder. What about the wind, if there is any wind? And resistance caused by humidity? And whether the ball in question is a new one or one which has been in used for several games?
Posted by Unknown at 4:47 pm

Wondering how much Hedley Jones will
appreciate your referral?
;-)

I really like the effect of people patterns in photography. Your "Coming and Going" photo captures a unique pattern. I wonder whether this one like the tennis balls boils down to mathmatics?