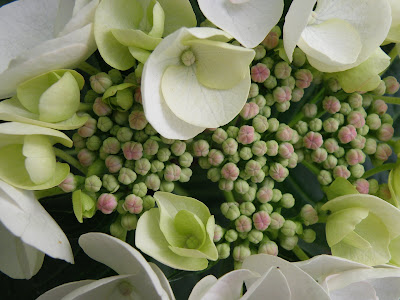 Others, notably I think Lucy Kempton, have taken a similar photograph to this,but I cannot refrain from closing in on the cluster of small buds at the heart of the inflorescence. When the plant arrived in the garden, the flowers were a dazzling white. In the last few days they have developed the pinkness
hinted at in the buds.

The little paths between the back gates of houses fronting on to parallel road are know in in these parts as  twittens. Ours between the back gates of houses in Mount Sion and Berkeley Road, is largely unmade, or if made once, is disintegrating. The result is a chance garden of wild plants and garden escapes growing  in the angle where the wall of a house meets the path. On my way to the dustbin, a few steps only, I count sow thistle, herb Robert, sedge grass, a poppy, alkenet, valerian. There was once, but is no longer, an elder among the wheelie bins.

It is daft to water in the middle of the day, when the suns absorbs the moisture from the surface of the soil,  but the new seedlings and the beans, squash and courgettes, just planted out, need a good soaking. And the only time I have for this pleasing but time consuming exercise is this morning. As I stand with the hose I count slowly to 30 to in front of each row of plants to ensure that it receives its due. And to further entertain myself flash the stream of spray towards  the sun to catch a rainbow.
Posted by Unknown at 5:22 pm

Love this post. Especially delightful, the description of how Mother Nature fills
the void with her own choice of plantings
when given the chance.

I don't think I ever took such a nice one as that. Hydrangeas are mostly blue round here anyway, the white is lovely.

Is there any soul so dull as not to turn a hose up to make a rainbow?