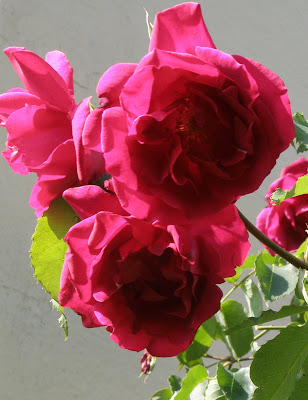 The climber outside the sitting room seems never to have been so exuberant. Heidi believes that it has been sustained by ash from the Icelandic volcano back in the Spring.

The little bit of land, which we call a garden is much improved since we had the bay tree cut down last year. But the bay is not entirely defeated. The stump on which we have placed a pot of  white nemesia, is now surrounded, by new  shoots, which grow upwards round the pot like the curved sides of a vase round a bouquet.

|Last year I was mildly reprimanded in this blog for expressing what sounded like enthusiasm for a Harley Davidson motor bike, which I saw parked outside a pub. Having little knowledge of  such machines I am attracted by their sculptural and iconic qualities rather than by their value as methods of locomotion or engineering distinction. I am reminded of this rebuke, when I ask after the Harley Davidson, which I see the proprietor of the Italian delicatessen Arte Bianca at the bottom of Mount Sion, riding the other day. "I'm not the owner, " he says. "I haven't got time for one. I am not old enough to spare the time. They take a lot of time". Like my friend Barrett Bonden, he's not too keen on Harley Davidsons. "You brake here in Tunbridge Wells, " he says, "and it stops in Southborough!".
Posted by Unknown at 4:43 pm

On a recent visit to Portland, Maine, one of the delights was the sight of roses climbing up houses and through and over fences. There were some alleys filled with roses from end to end.

There is a variety of rose called Kiftsgate which is a prodigious climber reaching up into and thorugh quite tall trees and buildings. It is white and has small flowers like those of a wild rose.