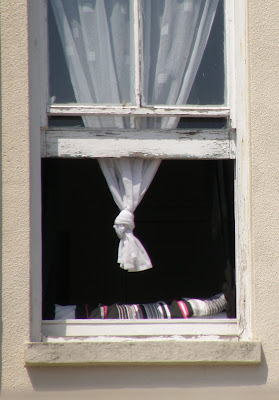 Window 5. On the seafront at St Leonards-on-Sea.

On the train, I find a seat in one of the four-seat arrangements opposite a man, who greets me as I sit down
with the words "How d'you do!". It is a greeting I recognise from the past when I used to walk in the Lake District. You would see someone approaching in the distance, draw near and as you passed  he would say "How d'you do! It wasn't a question just a way of saying good day. He is reading, but closes his book and puts it in his pocket before leaning back and closing his eyes. He has long grey, slightly wavy  hair, swept back from his face, and reaching to just above his collar. He has a long face, lined and a little weary. In repose, his face has the quality of a sketch of itself, shaded with broad lines and somehow unfinished.
As I settle into my seat I am aware of two plump young women, each with a small active child in the four-seat arrangement on the other side of the aisle. Shouts of greeting are heard and another two young women appear. "We're going to London," says one of the women with children, "We're going to the zoo!" The noisy exchange continues. The children meanwhile are in full action. They climb over the table, under it, over the knees of the women and into and out of their arms.One is sucking some kind of coloured fluid through the teat of a feeding bottle. They whoop and yelp words, which are not quite words. Opposite me the grey haired man shifts uneasily. His face grows longer. At the next station, the second lot of women bid farewell to the party going to the zoo. There is a flurry of hugging and kissing, denimed bottoms swell and overflow in waves of white flesh. The babies become bolder in their antics. One child staggers to his feet,  his bottle held to his mouth and staggers about (like his Dad might I imagine with a bottle of lager instead of liquid sugar). The child, minute in contrast with his pink, abundant mother, has a small, mobile, monkey face and sticky-uppy hair. The man opposite rises to his feet, picks up his rucksack and moves down the aisle. As he leaves, he turns to the mother of the noisiest child and says: "Can't you keep your children quiet? I have had a long, hard day. I'm tired. So I'm moving" "They're kids," says the mother. "I know," says the man making his way to the  far end of the carriage.

In the pocket of the old khaki gillet, which I wear because of its pockets rather than for warmth or elegance, I find, when I come to take it off,  among more important items,  leaves from the privet hedge,which I have been trimming for the first time this year.
Posted by Unknown at 5:35 pm

Once again, your observation (the man on the train) engages my interest for what comes next in the story. Then leaves me to find it in my own imagination.

The magic of good writing.

yes, it's a lovely piece. I find I like and sympathise with both parties. The final 'I know'is tantalising. What was the tone in which it was said? Don't tell me, I'd rather not know!

I have several gilets and raincoats and like to keep odditis in their pockets, to enjoy coming upon later. One has a small wookden spinning top I bought at a craft stall, put in the pocket then, and have never taken out.

It's no longer possible to speak ill of children. Most of the time it is, anyway, unnecessary; their foibles can be tolerated. But what is more rarely recognised is the cumulative effect their foibles can have. An elderly, tending towards old, person can simply be worn down. There is an assumption that advancing age brings tolerance; my experience is the reverse. In fact it's time to stop typing - right now.

Lucy That wooden spinning top sounds as thought it is a comfort whenever you encounter it polsihed by years of residence in your pocket.

BB I have always thought that advancing age brings grumpiness and irrascibility rather than tolerance. I have certainly become less tolerant with my advancing years. On this occasion my sympathies were with the tired man opposite me, but I was saved from the invetable loss of calm by having decided neither to try to sleep nor to read, but to note down proceedings - one of the benefits of blog-writing.