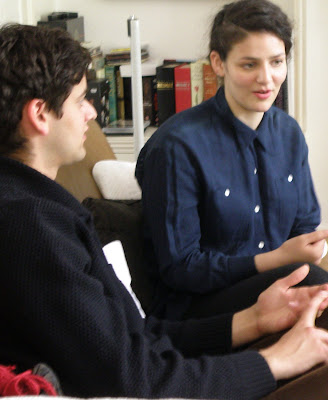 Grandchildren, Jacob and Jet, on a recent visit. Not so long ago you had to keep them entertained. Now they entertain us.

The Italian delicatessen called Arte Bianca at the bottom of Mount Sion, has had tables outside for coffee and snacks for some time. it is a corner shop.  On one side, the platform, following the slope of the ground,  used to make sitting a little uncomfortable. Now the owner has built up the platform so that it is on a level, but doing so has necessitated a step, with the result that chairs at a table at the top level are a few inches higher above the ground than those at the lower level. The beautiful bit of ingenuity that earns general applause is to place higher chairs, like bar stools, at the lower level, bringing sitters up the same height as people sitting on on the upper level.

A few weeks ago, knowing her liking for his work, I gave Amanda, who works sometimes at Hall's bookshop a novel by Georges Simenon, which I had just read. In exchange she handed me a book called Il avait plu tout le dimanche "It had Rained the Whole of Sunday". She had just got hold of it, and did not, I think,  know its contents. It consists of a series of short chapters describing  the character and life of a young man from Alsace who comes to live in Paris which he loves more than annywhere else on earth, and the day-to day occurrences of his life as a post office clerk. It is by a historian called Philippe Delerm, and written with a particular French charm and humour, the charm that produced Monsieur Hulot, one might say. A few chapters on, and I have the explanation for the title. The central character likes reading Simenon's Maigret novels. But his preference is for the opening plaragraphs rather than the development of  the stories. The novels appeal because they invariably begin with a description of melancholy townscapes and sentences like "Il avait plu tout le dimanche". So it's back to Simenon.
Posted by Unknown at 9:45 am

Two very lovely young people, Plutarch. What joy they must bring you.

A fine-looking brace of grandchildren indeed!

Catching up with your blog after being away, I must say this is a handsome photo of your grandchildren, such lovely and intelligent looking young people that you must be very proud of. Thanks for sharing!