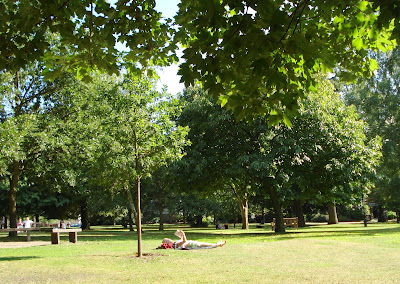 Reading in the Grove.
.
A big parcel arrives from Abe Books, containing Le Petit Robert, the monolingual dictionary which is generally regarded as the most useful and accessible by French people. It is only "petit" in the sense that it is not its bigger brother Le Grand Robert de la Langue Francais, which consists of 9 volumes. Le Petit must suffice for me. It has plenty of examples included in the definitions, which is an important feature serving almost as a dictionary of quotations.
.
A piece of A 4 paper has on it what looks like a red stain. On close examination I see veins and a familiar outline and I realize that it is a print of a single petal which I made by exposing the petal to the photocopy facility on my printer. I like it for it ambiguity and apparent fortuitousness.
Posted by Unknown at 2:52 pm