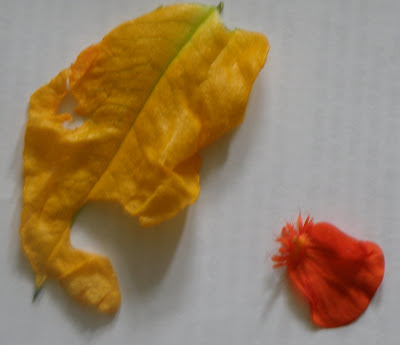 A courgette petal and a nasturtium petal.
.
The absurdity of phrase book language has never been better captured than by Eugene Ionesco
in his play (or as he calls it "anti-play"), La Cantatrice chauve, The Bald headed Prima Donna The text, written entirely in the language of phrase books, makes me laugh aloud however often I read it. The translation below is mine. The text, particularly because the characters are English stereotypes, is funnier in French.
From the stage directions of the opening scene, which I have abbreviated, your realize that it is all about stereotypes.
Mr Smith, an Englishman, in his armchair and his English slippers, smokes his English pipe, and reads an English newspaper, next to an English fire. Beside him, in another English armchair, Mrs Smith, an Englishwoman, mends some English socks. A long moment of English silence.
Mrs Smith.
I say, it's nine o'clock. We have eaten soup, fish, potatoes and bacon and English salad. The children have drunk English water, We have eaten well this evening. It is because we live in the suburbs of London and because our name is Smith.
Mr Smith goes on reading clicking his tongue...
.
In the vegetable garden, the sunflowers don't stop growing and must now be 12 ft tall. The blooms, though, are not as brazen as they were at first, and the better for modesty and neatness. As I look up, I notice that a group of three or four buds at the top of a stem have engaged with the branches of the old and decrepit apple tree next door, a touching sight.
Posted by Unknown at 2:22 pm

We had a totally humourless French teacher who read us through La Cantatrice Chauve after our O levels. That and Sartre's 'Les Jeux sont Faits'. I think we proablably laughed more at the latter...

I guess a humourless rendition is what is needed in both cases to make one laugh.

The "because we are English" phrase is a device which Romain Gary uses - a way of linking two facts or opinions which, though true, are made ridiculous by the contingent relationship. Gary uses it over and over in various ways but it is always funny,

BB Yes, and there is also something funny when smugness and complacency are unrelieved by self-awareness.