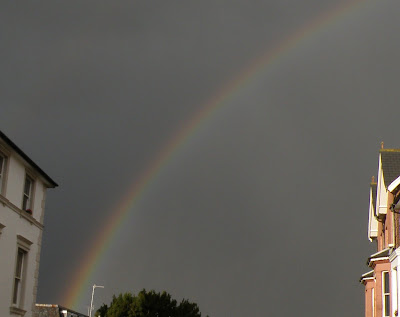 "There's rainbow," Heidi calls to me when I am downstairs in the kitchen. " a double rainbow". I run upstairs and there it is, only a single one by now, but bright enough to win Noah's approval, and to make me grab my camera. I think of what used to be a favourite line of soap opera script writers, "everything's gonna be alright," because that's what rainbows are about.
.
In Watersone's bookshop, two teenage girls are standing in front of a shelf of English classics. One knows her onions and tells the other what's what. "That's Emily, she says, " And that's Charlotte..." Passing on from the Bronte's she responds to her companion: "P. G Wodehouse? No it isn't. It' not heavy at all. There's always a jealous lover somewhere. They always get married at the end of the book."
.
On Hungerford footbridge, I watch different people stop to take a photograph, all from more or less the same spot, of St Paul's Cathedral. I
imagine a pile of photograph as high as St Paul's itself assembled from all over the world. I suppose it's the same wherever there is an important object to view, that people want to take a little bit of it away for themselves. In this respect digital cameras give instant satisfaction.
Posted by Unknown at 12:38 pm

Hungerford, is that the bridge across from the Tate Modern to St Paul's? I thought that was called Millennium? Oh, we got some nice photos there and enjoyed the walk.

I'll leave you to enlighten Marja-Leena. As to the two girls and book titles, what it proves is Waterstone's pitifully small collection of classics. For the eye to slide from the Bs down to the Ws so quickly is quite shocking.

Well done for capturing the rainbow! I saw it - or perhaps another one - in Oxford St. and by the time I had extracted my camera from its protective plastic bag, the rainbow had disappeared before my eyes.

I love the way the houses on one side of the street are shadowed and th others illuminated in the way they only ever are in rainbowish weather. Lucas's aside is an interesting poser: do we all see the same rainbow wherever we are?

The girl's range of readng and unpretentiousness about it is impressive and heartening. One might expect teenage girls to know their Brontes but PGW thrown into the mix is a nice surprise, with such a neat evaluation too!

a rainbow is a virtual construct ... that arch wot you see is made up of countless individual reflected images of the sun, refracted in to different parts of the spectrum in an orderly pattern according to the position of each raindrop relative to your eye and to the sun

however, even knowing this, they almost always make me laugh, or cry, according to chance and to circumstance

M L: Hungerford Bridge used to be a narrow pedestrian walkway attached to the railway bridge between Charing Cross Station and the south bank of the Thames. You and Ted must have crossed it when you came to visit us. Like the Millennium bridge to which you refer, and which is further down the river towards the sea, two replacement bridges, one on either side of the railway were completed during or almost during the year 2000. It is one of the two replacement bridges which I was talking about.

BB: I think their eyes were wandering all over the place as eyes do nowadays trained and modified by watching computer screens where everything is happening at the same time.

L: I think it must have been a different rainbow unless you are referring to an ideal, platonic rainbow to which all ephemeral rainbows conform.

Lucy: I am glad you pointed out the way the light from the rainbow seemed to be reflected on nearby roofs. I nearly made a similar comment except that I was not certain that the light did not come from the sun, which touched on the roofs in the course of causing the rainbow.

Tristan:If that is the case how do you explain:
(a) the pot of gold hidden at the end of the rainbow.
(b) that somewhere over it, "there's
a land that I heard of once in a lullaby"?