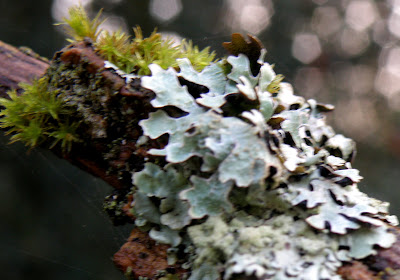 On a dead branch is this unexpected garden.
.
From a note in Balzac's strange novel Le Peau de Chagrin, I learn that the word "cravate" which means a necktie in French, and in English, well....a cravat, comes from the word croate and refers to the ornamental garment, which has been "since the 17th century a part of the uniform of Croatian soldiers." The narrator in the novel refers to some young men as "cravatées à déspérer toute la Croatie"
.
All night the wind buffets our house, rattling the windows, and rakes the branches of the lime tree opposite. In the morning I raise the blinds to see if the world has changed, but everything is in its place.
Posted by Unknown at 2:55 pm

Nice to pick a totally theoretical subject. Other than weddings and funerals when did you willingly last wear a tie? Retirement shapes our necks for freedom.

Sometimes I feel nostalgic for ties, but not often.