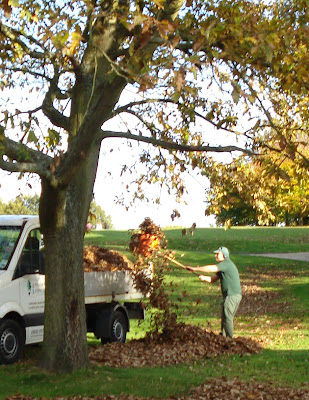 Autumn in Calverley Ground.
.
I like the words used instead of other words, which people momentarily can't remember, don't want to or never could remember. Thingummy is one which becomes thingamajig or thingamabob when subjected to colloquial variations. All three are in Chambers Dictionary with several spelling alternatives. Also in Chambers is doodah, which I heard to day and set me off on this vacuous trail. "Did you remember my, m' doodah," says one woman to another as they emerge from a car with shopping bags?" The "'m" suggests that she doesn't at the moment have the word she is looking for in her head.
.
At last I am beginning to read a birthday present from September, The Philosopher and the Wolf by a philosophy professor called Mark Rowlands. The author spent 11 years living with a wolf, which accompanied him to his lectures. Most of the time when he was lecturing the wolf called Brennin slept during the lectures but occasionally became bored and began to howl. The book is about humans as well as wolves and the distance between the two. "Humans are the animals that believe the stories they tell about themselves," Rowlands writes. I can't wait to get back to the book.
Posted by Unknown at 1:30 pm

Thanks so much for sharing the marvelous quote
about humans.
Do you know the blog, "The Daily Coyote"?
Another fascinating true story about a young woman's accidental life with a Coyote.

Then surely you must also be a fan of truc. The English seem to prefer polysyllablism, as if allowing themselves time to think of the underlying real word (eg, whatchermicallit).

Thankyou, CC, I will check out the coyote.

BB As I do not often have the opportunity to converse in French I am not as familiar as I would like to be with idiom of the conversational kind. Le Petit Robert, to which I have just referred following your comment, quotes Troyat: Qu'est-ce que c'est que ce truc jaunâtre là bas? De la ratatouille nicoise." Merci. Un bon truc!

'What did you do at the weekend?' I used to ask my lyceens.
'Plein d'truc' came back the grunted adolescent reply.