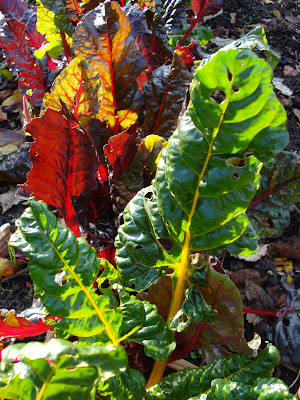 The variety of chard called Bright Lights lives up to its name, especially when the sun is low in the sky.
.
In the train I am sitting opposite a young woman busy writing cards on the table between us. Her book, closed on the table, is a paperback called Eat, Pray, Love and subtitled "One woman's search for everything". It is by, one, Elizabeth Gilbert and has according to another line on the cover, " sold over six million copies".
.
A postman whom I haven't seen before hands me a parcel when I answer the door. "Are you alright" he says. Depending on the tone of voice, this locution could have a number of different meanings. In transcribing it, I leave out a question mark, because clearly it doesn't require an answer. Rather it signifies a cheerful "good morning!". But with another intonation it could mean: "Is there something wrong with you?" Or, as when relatively recently a railway employee used the same expression to me when he saw me taking photographs at the end of the station platform, it clearly meant, "what mischief are you up to?"
Posted by Unknown at 2:12 pm

Taking photos in some areas really does seem to be quite problematical now. I heard a programme about a well-known street photographer who is regularly harrassed, told he is breaking the law, etc, when simply photographing interesting old buildings. Ironically, in the past he had helped to catch a criminal by inadvertently photographing him fleeing from the scene of the crime. Now, he says, he feels less inclined to be so helpful.

You are quite right. A man was questioned by the police the other day for taking some photographs from the Millennium Bridge in London. Numerous other people were doing the same thing. The polcie said they were doing a random check. He protested and was held in custody dor several hours under the Prevention of Terrorism Act.