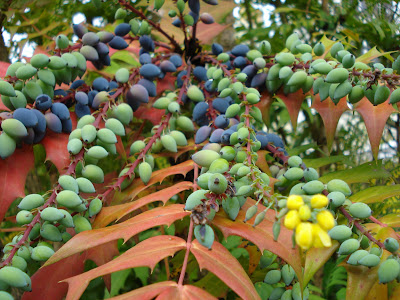 There isn't much that is wild in these parts. There are no wild woods or heathland, unless you include The Common, which incorporates a cricket field, is studiously maintained and divided by hard-top paths and one or two narrow roads, and so is urban rather than rural. For natural history, there are apart from The Common, the parks ( The Grove and Calverley Ground), where there are garden birds to watch and a few wild flowers. But seldom is there anything to set the heart racing. To make up for the scarcity of wildness, there are a number of exotic shrubs cultivated in the front gardens, which I pass daily, and which are not found in the wild. Where else would you see, in such profusion plants, which originate in the Himalayas, China, and other even more distant parts of the world? I snap this mahonia the other day when it is in flower and at the same time shows off its berries, ripe and unripe There are three different colours apart from reddish the leaves.
.
The book which I have just finished has left me stunned and amazed. The Philosopher and the Wolf by Mark Rowlands is an account of the author's 11 years which he sharedwith a wolf while teaching in an American university, and later living inIreland and in France. Rather than a mere account of the mechanics of his relationship, it is a profound reflexion on the nature of existence, on love, death and the elusive and mysterious state of happiness; on what it is to be human and on what it is not to be human. So much is there to think about in it, that it is one of the very few books which I found not only difficult to put down, but wanted to start reading again immediately after reading the last sentence.
.
In The Grove, the wind blows out the leaves still attached to a horse chestnut so that they resemble the ears of a spaniel running at full tilt.
Posted by Unknown at 11:20 am