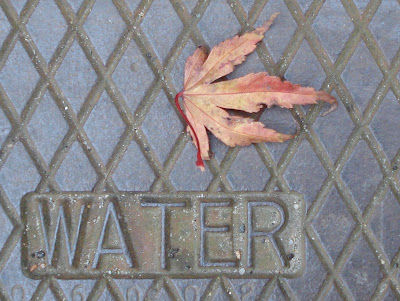 Today's leaf.
.
Starlings are back in the Grove. I hear, rather than see them as they gather in one of the trees. What is the collective noun for starlings? In a book which I had as a child there was a list of collective nouns, among them "murmuration" for starlings. Seeking to confirm this, I find the word in the The Shorter Oxford English Dictionary. But there, it only signifies "murmuring", and its usage appears to be confined to "late Middle English". No mention of starlings. But my childhood reference and memory are vindicated by Chambers, which calls it a "doubtful word for a flock of starlings". All the same, murmuring is rather an understatement for the noise the birds make when they gather - a sound higher pitched and more raucous than what normally passes for a murmur.
.
There is a tall, elderly man of upright bearing who wears an overcoat and a tweed cap. In the summer I have seen him in an old, military beret worn in the army style pulled down over one ear. He is to be found, most afternoons at the entrance to Calverley Precinct, across the road from the hideous Millennium Clock. Here he performs a slow and meditative march, to and fro across the width of the Precinct, his eyes straight before him. He walks so that his heels, hit the ground first, a little before the rest of his foot. It is a sort of slow march but not ostentatious. He is performing for himself and not an audience, in the parade ground of his mind.
Posted by Unknown at 1:32 pm

Ooh, a handsome piece of English street furniture that I wish I had in my collection :-)

I especially like the picture your third paragaph paints, Joe. The last phrase, "...in the parade ground of his mind," is so evocative; haunting, in a way.

(Perhaps because I remember the parade grounds I marched on, in my younger days, in the navy.)

Forgive me if I've forgotten but have you posted the hideous Millennium Clock photographically? If not I suggest we all have an opportunity to judge it. Is there a consensus in TW about it? If so and if it's thumbs down, who's to blame?

The marching man. Square-bashing, as I'm sure you remember, was the first form of trauma the RAF dished out. Many discovered they coudn't co-ordinate their legs and arms and were punished for this. At 6 ft 1½ in. I was particularly vulnerable following a complex manoeuvre called "Tallest on the right, shortest on the left, in two ranks, SIZE." which ensured the tallest members of the troop always led the march whatever the direction. The danger was that you might fail to hear a command and - with no one in front of you to act as guide - go on marching, detached from those behind. Many gently brought-up youths suffered dreadfully on the square and I fantasise about your man. Perhaps he entered the services as a poetry-loving aesthete and didn't really survive square-bashing. Now Dryden is out of the window and the residuum of his motor processes are given over to re-living those terrible experiences.

Worst of all: slow marching. There was always a chance one might topple over in mid-step.

M-L I can't resist these manhole covers. Like the leaves that I see pressed into the road I just keep snapping them.

Crow I find it hard to think of you in the navy. Could we have some reiminicsenses. From the crowsnest, pehaps.

BB The chief motive of this blog is to record beautiful things. Hence a picture of the clock will never feature here. I would not risk pointing a camera lens at it, meanwhile, for fear of the lens shattering. I know of no one in Tunbridge Wells who has a good word for it. In the year before its erection, alternative plans for a millennium clock were shown to the public. All were equally without merit. When shown a form and asked for my comment I put a line through all four. A hole in the ground would have been a better bet.