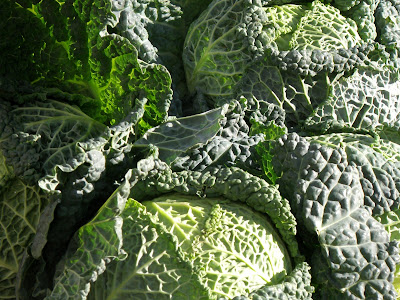 Savoy cabbages at the Pantiles Farmers' Market.
.
This morning I reflect as I wake up on the phrase "i'n't?", used in street slang, at the end of a sentence to elicit agreement or to reaffirm its truth. It is rather more general in meaning than "isn't it?" from which it is derived because it applies across a wider range of contexts. So that it becomes one of those adverbs or adverbial phrases which, in numerous languages, help to emphasis a statement, without adding to its meaning. Invariably it is in the form of question, but the question is rhetorical. In English, posh people used to end a sentence with "what?" to signify something similar. "Eh?" is another such word, though not very polite: "Don't say "eh" we were told as children. The French, of course have, "hein?" and "n'est ce pas?" which serve a similar purpose . And there is always "non?" and "no? " in other romance languages. The German "nein?" is probably more usual an expression nowadays than "nicht wahr? which is favoured by phrase books.The Spanish say "verdad?" and the Italians vero? for "isn't that right?" in a similar way. One day a hundred years from now perhaps a wider spectrum of people will conclude their sentences with "i'n't?" if only to show that we should never be didactic about language.
.
Gardens are full of treasure much of it buried. That goes for potatoes and other root vegetables, and also for lost implements. Today as I clear yet another bed of nasturtiums and lift some dahlias for the winter, I find a perfectly good trowel a few centimetres beneath the soil, its handle imitating an intractable root.
.
Posted by Unknown at 2:48 pm

How interesting, I'm not familiar with "i'n't?". The Canadians are teased, even spoofed, for their "eh". In fact there's a whole page on it in wikipedia: http://en.wikipedia.org/wiki/Eh#Canada

The way language evolves and varies in regions and countries is fascinating, eh? :-)

In Edna Ferber's novel, So Big, her lead character (Selina Peake De Jong loves the farmlands where she has chosen to teach. She finds that even the cabbages are beautiful.

She should have seen these, hunh? (That's southern US speak for "i'n't?")?

I cannot love "i'n't", especially where it forms the climax of "I was like: i'n't." Rhetorical indeed. The French and the Germans are linked at birth by their in-between words: alors becomes also although the latter is disturbingly close to a rare instance of a German faux ami. Unless rendered Germanically, which I lack the phonetics skills to reproduce, it has a flat, unexpressive quality to English monoglots. Germans make great play with the rising cadence - al-SO - and it is enormously useful to someone on the outer fringes of German-speaking, like me, as a way of getting one's mental vocabulary in order before proceeding.

I have always found cabbages beautiful.

M-L Thanks for the Canadian "Eh?"

Crow ..and for the southern "hunh?"

BB "I'n't?" is I agree, hard to love particularly when the tone of voice indicates vapidity.

One other variation on i'n't: the Pennsylvania Dutch add "ain't" to the end of declarative statements, as in "The cow over the fence is terrible purty, ain't?"