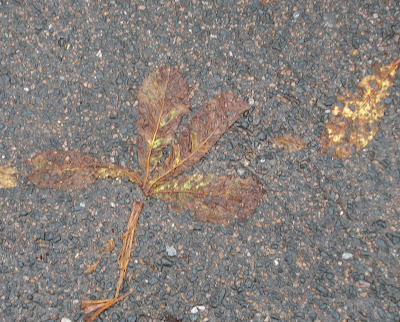 Sometimes leaves are so forcefully pressed on to the tarmac by passing traffic that they seem to be printed on its surface.
.
There can be no better recommendation as far as I am concerned for the new president of Europe than his reputed espousal of the Japanese poetic form known as haiku, and now enthusiastically taken up by some western poets. A haiku (usually set out in three lines of five seven and five syllables, respectively) may, one would like to think, turn out to be an inspiration to other politicians, because of its brevity certainly; but above all because the form requires careful and balanced thinking, sensitivity and a respect for silence. For a haiku should be conceived in silence, end in silence and incorporate a hint of silence in the hiatus, which develops between an initial image and a second concluding image, with its slight jump from one logical impulse to another.
.
On the way up Mount Pleasant, I meet a neighbour, who has just left her husband, now getting on in years, up a ladder pruning some shrubs. It begins to rain. "He will be pleased that it's raining, " she says, " so that he can pack up and go in doors." "Doesn't he enjoy gardening ?" I say. "He's not been too well, recently," she observes; " I said goodbye to him before leaving, in case I never see him again."
Posted by Unknown at 4:18 pm

To which the only satisfactory conclusion would be that having fallen from the tree and severed his connection for ever with horticulture he will attract that most self-serving and ultimately unforgivable of epitaphs, "It's what he would have wished."