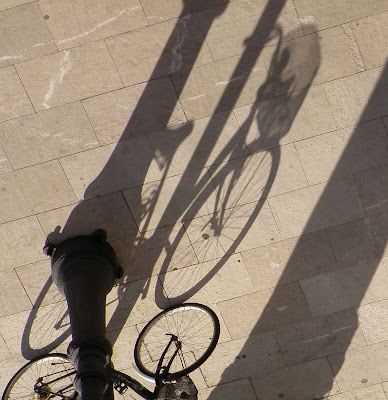 More shadow-play to play with.

There's a yellow line on the platform at the railway station to keep passengers from standing too near to the edge, while waiting for a train. "Look at that man, " says a little girl to her mother; " he's gone past the line."
"He's a grown up," says the mother, "he knows what he's doing."

On the train I am sitting opposite a  plump young couple who, while not cuddling, are talking about their  domestic finances. The young man writes a list of their outgoings on the front page of the free newspaper called Metro which he has been reading, and ticks them off as they come to a decision about how each  item will be treated with their respective funds. The conversations wanders from the specific to the general. "What's mine is mine and what's yours is mine," says the young woman. "Right," says the young man with, I fancy, just a faint undertow of doubt.
Posted by Unknown at 5:39 pm

Wait till the child grows up and learns the truth about "adults" knowing what they're doing. Right up there with Santa and the Easter bunny... ;-)

Here the bicycle shadows are elongated as if they are of thin etherial machines. I also appreciate what you have done with the forshortened shadows of the men posted 27th Oct. Those shadows are like squat wrestlers facing each other.
Great to see you yesterday!

In the end it all boils down to whether they have a joint bank account.

Lucas The time of day is important. So is season and the geographical position of the photographer, needless to say.

BB it was clear that they didn't.