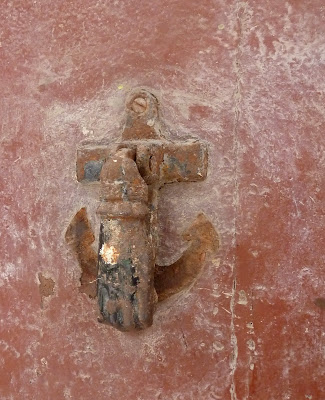 On an old door.

It took me some time to stop thinking of The Bible as something wholly connected with religion. In spite of or perhaps because of its associations, the ringing tones of the King James version are profoundly engraved  in our minds. The language is the rootstock of  English prose and poetry. Its phrases, absorbed in a lifetime, are at the heart of the culture in which we are bred.   Now I am beginning to read it for pleasure attached to no duty or moral constraint,  as a collection of stories, poems and homilies, for the sheer pleasure of the words.
Today I happen upon The Book of Ruth, a story of  deep affection, loyalty and kindness, which I remember liking as a child.  Falling upon hard time, Naomi, her husband  and her two sons go to live , you will remember, in the land of Moab, a neighbouring country, where her sons marry local girls and prosper for a while. But her husband and both her  sons die; and Naomi advises her daughters-in-law to go back to their families, as she has no alternative but to return home. Ruth one of the  young women refuses despite her mother-in-law's entreaties to follow her advice. She says: "Entreat me not to leave thee, or to return from following after thee: for wither thou goest I will go; and where thou lodgest, I will lodge ...".  When Ruth and Naomi return home  Ruth encounters Boaz a worthy  landowner in whose fields she gleans during the barley harvest. Boaz sees to it that there is extra barley for her to glean and noting her loyalty to Naomi, to whom he is related, decides to marry her, having negotiated a number of legal problems on the way. "So Boaz took Ruth, and she was his wife, and when he went into her, the Lord gave her conception and she bare a son."
It is a moving story in many respects and one which Victor Hugo was deeply enough aware of to make the subject of one of his better known poems Booz endormi. To the kindness and loyalty which underlies it, Hugo adds a dimension of mystery and sensuality. He describes how Ruth, at the end of the harvest when Boaz (Booz in French) is asleep in the fields, lies down, "bare breasted at his feet. "Ruth mused and Boaz slept; the grass was dark; the bells of the flock quivered indistinctly; an immense goodness was falling from the firmament; it was the peaceful hour when the lions go to drink".

Mother to little girl in Sainsbury's this morning: "I know it's a Christmas tree, but it's not Christmas yet, honey!"
Posted by Unknown at 5:24 pm

An unexpectedly pleasurable talk at the Hay Festival was given by a man who'd written a book about the logistics of creating the King James Version. Committees and sub-committees, chairman with limited responsibility to approve some things but not others, then the ultimate authority. Sounds as dry as dust but it was fascinating and, at the back of our minds, we had the reassuring evidence that the system had worked well.

All of which brings me to that achingly moving line: "for whither thou goest I will go, and where..." which touches on the poetic minefield of repetition. Poetry (verse in my case) is the antithesis of repetition, one tells oneself. Poetry is mainly compression. And yet if the line has a special kind of certainty and the writer is confident enough, all or part of what has gone before may be repeated. The test will be: does it seem inevitable?