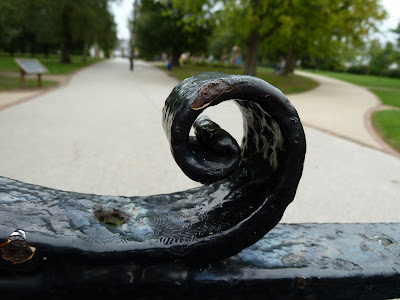 Part of the gate into The Grove, something I see almost every day, but which I don't really notice until I photograph it close up.

After the rain the earth is sodden and water drips from every branch and leaf.  Drops of water shine on blades of grass  and on clover leaves like glass beads.

On one of the two posts erected to support a beech sapling sits a squirrel. Its paws are folded over its stomach as though it is meditating. But something is worrying it. Every now and then it makes the odd noise that squirrels make, half a cluck, half a squeak. I take out my camera and photograph it. Usually on such occasions there is no time for a portrait, but this time the pose is held. The creature might have been waiting for me. Only when I walk away does it jump down from its perch and go about its normal business.

Great photo! We do share a love of small details. And I enjoyed your description of the meditating squirrel.

I was just testing my macro lens. There was nothing special about this bit of wrought iron, but it struck me afterwards that it put our little park nicely in perspective.