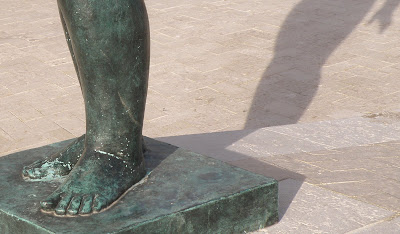 Feet again. This time they belong to a new and not very good sculpture of a woman above the beach in Sitges. The feet are probably the best thing about the sculpture, part of which is revealed here by its shadow.

There is a delicious book  called Elizabeth and her German Garden by Elizabeth von Arnim, which I have been meaning to read for at least 50 years. The author was born in Australia and brought up in England. In 1894 she and her first husband, Count von Arnim  moved to Nassenhide in Pomerania which became the setting of this, her first novel. It describes how Elizabeth took over the  deserted garden of her husband's estate and turned it into a thing of beauty. As I read the first couple of pages  I realize what I have been missing. She is sitting in her garden in late afternoon. "Two owls are perched near me  and are carrying on a long conversation that I enjoy as much as any warbling of nightingales ...They say the same thing over and over again so emphatically that it must be something nasty they are saying about me; but I shall not let myself be frightened away by the sarcasm of owls".

It is begnning to be that time of year invariably recorded in this blog when the afternoon sun shines into The Grove at a low angle serving to spotlight through the tree whatever its beams encounter. This afternoon two girls, one with long reddish hair, sitting on a bench are illuminated like characters in a play upon whom the attention of the entire audience is concentrated.
Posted by Unknown at 4:35 pm

Elizabeth speaks of the sarcasm of owls: I endure the ridicule of crows who visit my trees every day. It's a wonder I have any self-esteem left at all.

I once spent a disturbed night in Bristol with the woman who was subsequently to become my second wife. For some reason seagulls of this seaport never seem to sleep. All night long they kept us awake with what we could only intrpret as dirty laughs outside the window.

The Sarcasm of Owls - a perfect title. It now only remains to complete the novel that goes with it.

Which leads me on to the famous Beachcomber feuilleton: Cart-Horse Stuck in Chimney.
The article that accompanies this headline has yet to be written.

Spot on. You are the novelist!