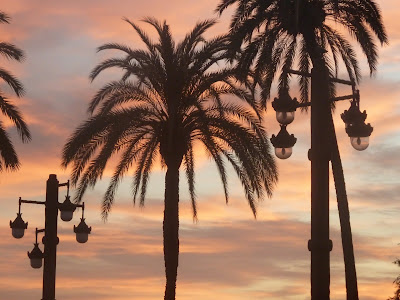 Palm trees and lampposts in Sitges.

As I clear a bed where climbing French beans have grown too coarse to eat in the pod, I collect those where I can rescue the seeds for cooking. Next to the beans, or has beans,  I sort the remains of this year's huge potato crop most of which is stored in hemp sacks for the Winter. But still lying on or in  the soil are numerous potatoes which I missed when lifting the crop. Those, which are green or beginning to be eaten by slugs and the like, are discarded, but there is a pleasure in rescuing smaller potatoes which have nothing wrong with them. It is the pleasure of frugal living. On the subject of frugality I think to myself about the opposite qualities, which seem to reign in my character - frugality and profligacy. The dominant one is, I think, frugality, but that doesn't mean to say that profligacy doesn't sometimes rudely assert itself. Not to day.

I have taken up tweeting again. I like the way it concentrates the mind. Although twitter seems to produce much that is inconsequential, I cannot help feeling that there is potential for wit and grace in the format. With apologies to Luigi Pirandello, I say to myself: one hundred and forty characters in search of an author.
Posted by Unknown at 5:11 pm