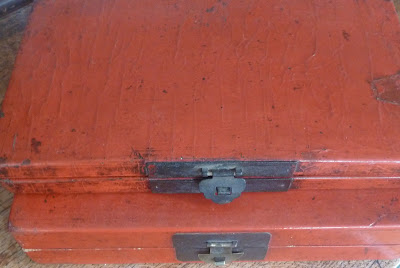 A couple of Chinese lacquer boxes which I photographed after posting on the subject of lacquer the other day. They are both useful and decorative and I love the colour.

It has struck me recently that good subject for a thesis, if anyone is looking for one, would be to compare social attitudes to sex in 19th Century European novels. Today I read in La Terre one of Zola's Rougon Macquart sequence, the description of a 14 year old girl taking her parents' cow to a neighbouring farm to be impregnated by a bull,  a transaction for which she hands over a small fee.  What takes place is described in remarkable detail for the time. The cow is of somewhat larger breed than the bull and the bull has difficulty in mounting her and delivering its semen in the normal way.
"Calmly and with great care, as for a serious undertaking,  she stepped forward.  Her eyes grew dark  with concentration and her red lips half opened in her expressionless face. She had to raise and extend her arm in order to grasp the bull's member,  which she placed dexterously in  position. And he, when he felt himself in command, gathered his  full strength, and penetrated with all his might, into the depth."
It is a scene which fits tidily into the narrative and takes it forward by advancing our knowledge of the girl and of the young labourer who witnesses the proceedings. To set it in perspective:  La Terre was first published in 1887. Dickens, it is true had been dead for 17 years but Trollope had died only four years, and George Eliot seven years earlier.  Hardy, a more likely candidate for a venture of this kind, meanwhile, had recently  published Far from the Madding Crowd and The Mayor of Casterbridge. But it is difficult to imagine even Hardy approaching such a subject let alone tackling it in such clinical detail. And as for the British public and the British press ....

At the butcher's counter in Sainsbury's this morning, a man buys a joint of Aberdeen Angus beef with evident relish. "A good investment!" he says to me as puts the package into his trolley.
Posted by Unknown at 5:32 pm

I imagine clambering about under fornicating bulls might well be frowned upon by Health and Safety these days. It's far too jolly an account and not pitiful and doom-laden enough by half for TH.

I suffered no attack of the vapours myself until in the very next breath you went on to the butcher's counter in Sainsbury's, and choice cuts of prime beef...

There's a scene in Larkrise where Laura/Flora witnesses a bull 'justifying his existence'. She scurries away in case the men laugh at her -- but says she was not traumatised. I'd look it up for you, but I'm not sure where my copy is and I have a lapful of baby.