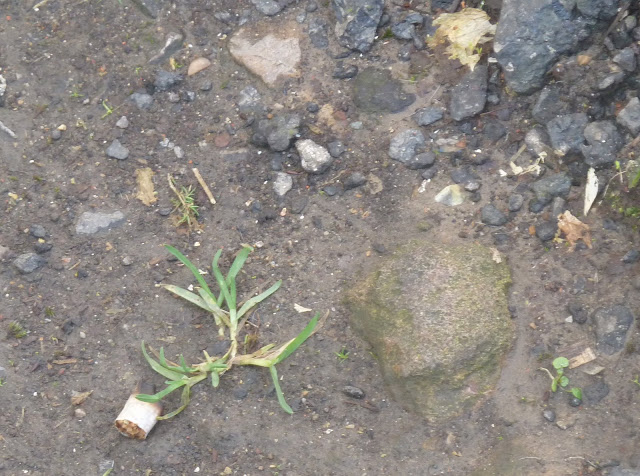 For a moment I look down and see what is there. Two or three tiny plants, a fag end, various stones, a piece of concrete, other fragments. I am not sure what to make of them. So I blow them up extra large. To see the world in a grain of sand. Click for wider dimension.
The first thing I see in the morning while drinking a mug of tea is the tulip tree in the garden opposite. It is an old tree with three trunks emerging from the single trunk with which it started. Some years ago tree surgeons spent the best part of a day removing its upper branches, a dangerous enterprise, which they maintained greatly extended its life. For a long time its lopped branches in the winter were a little sad to look at, but now it seems that the surgery has done its job and, the branches having sprouted, it has assumed its original sculptured elegance even when there are no leaves to clothe it. At this time of year when the sun rises there is a pale, yellow sky  behind  it,  and squirrels, scampering along the black trunks and branches, add a theatrical  dimension - a fit start for the day.

Gulliver's Travels the greatest of English satires deserves to be read widely and regularly by anyone who is bothered  by the ghastly behaviour of human beings both now and in the past. The conflict between Lilliput and Blefuscu should be on the table at the beginning of every peace conference. The subject of their dispute and frequent military combat, the way boiled eggs should be eaten, by breaking the big end or the small end, should be the first item on the agenda. Meanwhile it is hard not to sympathise with Gulliver's dislike of his fellow humans after returning from the country of the Houyhnhnms, the rational, horse like creatures, whom he encounters in the last of his voyages;  and not to be repulsed  by the Yahoos, the name given to human beings by the Houyhnhnms. Having returned to Gulliver's Travels on my Kindle reader, I find myself  admitting reluctantly to being a Yahoo with all a Yahoo's appetites, but wishing sometimes for something better. But that's a Yahoo all over.
Posted by Unknown at 4:50 pm

I'm assuming you were careful to check the spelling of Houyhnhnms. In fact I've just checked it myself.

Thanks for checking. It took me some time to get it right. It strikes me as a good name because that is the way a horse would pronounce it.