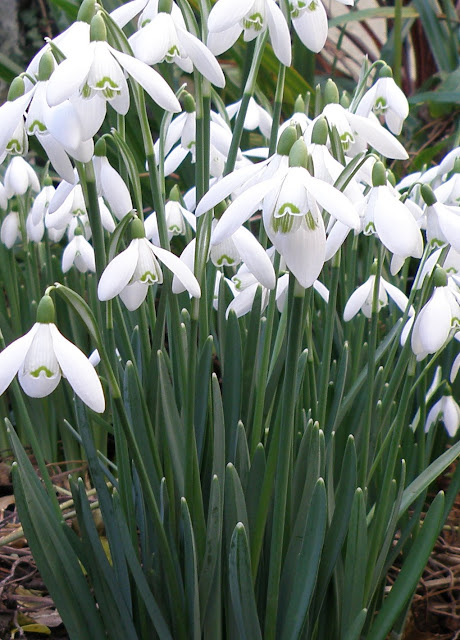 This year's snow drops, perhaps because of the snow and cold weather earlier, are something truly to celebrate, now that the buds have opened.

One of the broadcasting successes of last year was A History of the World in 100 Objects presented by Neil MacGregor, director of the British Museum.  I missed quite a lot of it, and longed for the book which would eventually appear. It did appear and I was lucky to have been given a copy for Christmas. Today I open it to read  it for the first time. I realize now that the book, unlike the programme, gives the opportunity to examine photographs of the objects as you read about them.  It is indeed an advantage.  But there there is an opposing argument, which I wholly understand. The absence of a photograph MacGregor says, in his preface caused "especially lively debate" in the planning of the series. "At first," he writes, " ... the Museum team, used to close examination of things, was daunted by this, but our BBC colleagues were confident. They knew that to imagine a thing is to appropriate it in a very particular way, that every listener would make the object under discussion their own, and in consequence, make them their own history."
With the book in front of me, I now have the best of both worlds, but I note that its layout, does not lend itself to easy viewing of the photographs side by side with the text. It is not a coffee table book, with emphasis  on the illustrations, as one might have been supposed it was going to be; rather it is a fat book, not much larger than an average paper back.  It has beautiful print and the photographs are never anything less than exquisite. But it is designed to be read, and read it will be, at least by me.

After a cold,damp winter, we sit outside the Black Pig, in the sun. We can feel the warmth on your face. "Vitamin D," says Heidi. "There is a glass of rosé  in front of her and in front of me a pint of Harvey's
Posted by Unknown at 5:16 pm

Labels: A History of the World in 100 Objects, Snowdrops, Vitamin D

You are the harbinger of Spring this year and welcome!!
I've just come in from running errands around town in a bitter cold wind and your Snowdrops were a welcome as a mug of hot coffee.

I too have have the book. A hardback and it has the heft of a housebrick. Like you I would have prefered the text alongside the all the images, but what a joy to read. One object a day, in the morning with a cup of tea. Perfect.

Your image of snowdrops is stunning.

Chez Bonden Neil MacGregor was long ago sanctified. That a voice so moderate, almost prissy, can convey so well, so enthusiastically, the very worth of knowledge. For me he did the impossible by explaining the aesthetic value of Christian art on his TV series. Later, at the Hay festival, he pulled off what can only be described as an act of conceptual art with his talk "If the British Museum were a novel..." The novel he had in mind was Tristram Shandy and, without losing an iota of impact, he subjected the words he delivered and the pictures he presented to Sterne's eccentricities. The 100 Objects idea was a triumph of intellectualism over enormous odds, forcing listeners to partipate in what was said. Your coda "and read it will be" pays him the tribute he deserves.

CC Last year the flowers were smattered with flecks of soil when I photographed them. Glad you liked them.

herhimnbryn In fact as I read on I am inclined to prefer being able to concenrate on the text than have the picture constantly in front of me. I find it hard to put this book down despite its weight.