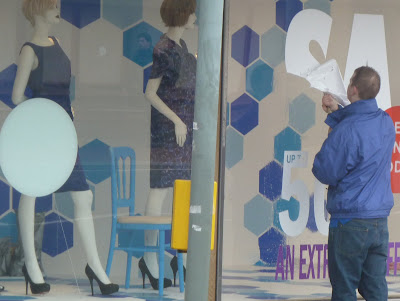 The end of the sale.

We see a  bad film the other day. No, a very bad film. Which in itself is an education. It is a DVD called Unrelated. It is an English film set in Italy,  where a bourgeois English family,  is on holiday in a villa. The family are the sort of people whom you (or at least I) would run a mile from on  first meeting them. They are rude, arrogant, stupid, pretentious, ignorant and they play party games like sticking labels on your forehead and asking you to guess who you are.  Are we meant to condemn these people or admire  them or at least admire the skill with which they are depicted? It is  impossible to tell. There are no standards by which to judge them. Everyone is awful, and try as you might, you can feel no sympathy for or interest in them. Or even for their guest a woman relative whose marriage is on the rocks, you gather because of numerous fraught telephone calls to England. You long for something bad to happen to them, but nothing does, at least until about two thirds of the way through the film, when eventually we switch off. After that we are past caring.  So where is the education?
What strikes me about a film  like this is that someone - the director for example, the producer, even the actors, must have been quite pleased with it, or they would have binned it long before its public showing.
And here's the lesson. The beautiful lesson.
Anyone who paints a picture, writes a poem or makes a film, unless it is to be seen by consenting adults and in private, should be sure that they have not allowed pride in their creation alone, to let them believe that they have produced anything of value. I address these remarks, I hasten to add, to myself. My ability to see faults in my own work, I have found only begins to surface after weeks or months. And I  trust it, therefore, only in deep perspective.

Malcolm the window cleaner comes with his power cleaner. It is a hose with a brush on a long telescopic pole which extends to upper floors. Water gushes through the brush  and streams down the window panes. He manipulates the device from ground level. I think of a pole vaulter about to vault. Will he leap over our three storey house. I doubt it.  But I try not to think about it as I work at my desk. Soon normality is restored. Normality is a beautiful thing, almost a beautiful as normality disturbed.
Posted by Unknown at 4:46 pm

Anyone who paints a picture, writes a poem or makes a film, unless it is to be seen by consenting adults and in private, should be sure that they have not allowed pride in their creation alone, to let them believe that they have produced anything of value.

unless it is to be seen by consenting adults and in private.

A really interesting read, though. Thanks.

Hmm, I enjoy that game with the sticky labels - one of the few things large multi-generational groups can play together.

Now feel as if you'd run a mile from me.

I agree with Plutarch too, that "pride in one's own creation" is by itself of no value and, as Plutarch writes, it needs to be backed up with a long editing process - be it in selection from a batch of photos, or the drafting and redrafting, discarding and recasting of the written word. I think this is crucial and I thank Plutarch for raising it.

Years ago, while we still lived in Kingston, we signed on for the Videoplus service whereby someone delivers a DVD (tape in those days) you have chosen to your door and picks it up a week later. This service continues here in Hereford and we'd give anything to bring it to an end. But - and here I believe is a situation you may have shared - the man who delivers is pleasant enough and his service must pay poorly for very long hours. We can't bring ourselves...

The choice of films is very limited and we are forced into making speculative choices. To which we apply the 20-minute rule. I look across at Mrs BB, note the negative twitch and pick up the remote. We have seen the start of some truly terrible films, some of them quite well known (Moulin Rouge, for instance). I must confess that many are British and have clearly been made on the cheap (The anonymous B&Q decor is a strong clue.) What this has taught me is that it is often possible to apply a one-minute rule. Cue to the New Yorker cartoon. The curtain is going up in the theatre and a man is saying to his wife: "Already I don't like it."

Dave King Not sure that I'm sure either.

Penny I have only played the game once and didn't enjoy it at all. But that was my fault. I think I might enjoy the game f I were playing it with people whose company I liked. The thing is if I like their company I would want to talk to them, rather than play games.


Lucas Now that I see you agreeing with me, I realize perversely, no reflection on you, that I am constantly guilty of over editing, fussing about, producing palimpsests instead of straight forward honest drawings or pieces of writing.

Try Love Film. You have a vast range of films to choose from and you can keep them as long as you need.

I always think of you when I think of that New Yorker cartoon which you drew my attention to, a long time ago, and which frequently comes to my mind when confronted with films or plays.

It must have been quite an awful film to receive such a pasting from you, who I tend to think of as being quite open and inclusive in your tastes!

Have you seen the film 'Another Year'? I haven't, but that seems to be a love-it-or-hate-it job which people seem either to describe rather as you have this one, or else to see as a masterpiece of observation, albeit uncomfortable.

I too must confess to having played the Rizla game in the past. Its name gives a clue, I'm afraid, to the state of the people who played it and why they found it amusing. I don't think I's enjoy it much now; in fact party games and games in general seem not to be part of the social scene any more and so much the better really, though I miss a game of Scrabble sometimes...

The lesson of pride in one's own creation being of itself no indicator of value is a tough but necessary one, which I fear must be learned and relearned... Graves' injunction 'Burn it!' is, however, often a salutory and satisfying one to carry out.