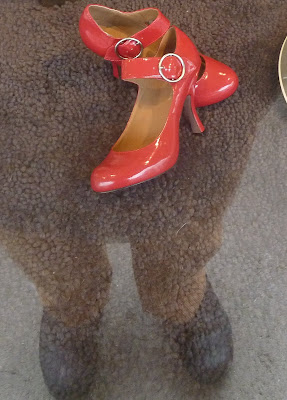 Those shoes again. First spotted a few days ago, still with tissue paper stuffed into them, in a shop window in the process of being dressed, they turn up now in the same window, but made to look as though they have just been kicked off  by a pair of elegant feet. They lie on a pile carpet. Against the background of the carpet, are  my own shoes and the lower part of my legs. They are outside the window but reflected in it, they appear to have taken on the texture of the carpet as though woven into it.  A complex relationship  which  could give rise to false surmises.  The camera can be a bit of a liar if not an outright fibber.

Today I realize with a surge of pleasure that I know for certain, what I  have always suspected,  precisely the meaning of  realpolitik. A ruthless and demented dictator is embraced (literally in some cases) by politicians  from democratic countries,who know very well that he is a ruthless and demented dictator, but do nothing about it, because of oil revenues, and because he helps  preserve a balance of power or an uneasy stability.What it describes is insidious  but I suspect that if I were a politician I would almost certainly be guilty of engaging in it.

Catching sight of yesterday's date, February 23, I recall that it is the anniversary of my release in 1958 from two years military service in the Royal Air Force.  National Service came to an end a few years later, but I am not sorry to have had the experience of it even if it interrupted, or perhaps I should now say augmented, my education. But who can tell  53 years after the event?
Posted by Unknown at 4:43 pm

Gosh, I never committed it to memory and now I feel I should have done. Sometime in April 1957 and so I'm coming up to my 54th. At this distance in time I can afford to look back with affection since the RAF usefully infuenced my higgledy-piggledy path through journalism. My feelings weren't so benign at the time, however. It was as if I'd been thrust into a washing-machine drum and someone had chosen a previously unknown cycle. I could have shrunk in the wash but I think I can fairly say the fabric stretched a little.