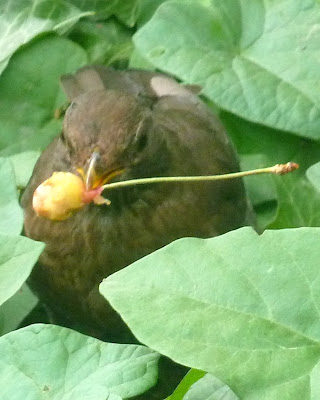 That blackbird again, this time with a the remains of a cherry in her beak.

There's a man who passes our house sometimes who talks to himself.  He has a pronounced limp.  We see him passing occasionally early in the morning and hear him shout into the air at no one in particular.  This morning he is walking ahead of me as I make my way to Sainsbury's. I catch  up with him  at the pedestrian crossing in Warwick Road. The lights are against him and he shouts and gesticulates  at the traffic, not in an aggressive way, but rather with a sort of forbearance. I feel myself in sympathy with him and  have the same attitude to traffic, especially now that I no longer drive a car.

This afternoon in Berkeley Road, the air is fresh, after the morning's heavy shower. The birds are especially lively, and I find myself between two blackbirds.  They sing from different rooftops at a distance of about 100 yards. They are supposed to be defending their territory, but I think as I often do how surprising it is that such sweet and fluid  a sound, should be essentially aggressive in nature.
Posted by Unknown at 4:35 pm

Delightful Bird with remnants of cherry.
The birds must like you. They seem to give you their best poses.

I think I was lucky, and the bird absorbed with the fruit.