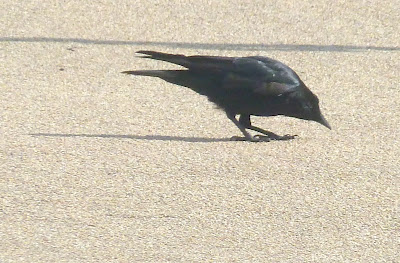 Investigation in The Grove.

To morrow, I realize, it will be six years since I posted my first observations here. The subjects were, a beech sapling in The Grove, some Morris dancers and a solitary girl hoeing in a vast field of roses.  I had been thinking about starting a blog for some time, but wanted to find a focus, before embarking on  a venture of any  sort. My inspiration was Clare Grant's Three Beautiful Things, which I am glad to say is still flourishing as an inspiration to others as well as to me.  Looking back through no fewer than 2136 posts, I recognize that I have made certain changes to the formula I started with. Most obvious perhaps is that one of my three subjects is now invariably a photograph. And second, that not all of the subjects can be described as beautiful; sometimes they may be curious or amusing, or simply interesting (at any rate to me). The observations have however remained positive. There are no beefs or moans.The important thing is that that I enjoy writing  them and  about the small corner of the world in which I live. I have not counted, but the little park round the corner from where we live, is mentioned numerous times, and has become by virtue of repetition, a permanent feature, a landmark in the geography of  my present life. So if I were to propose a toast on this occasion it would be I think to The Grove, which features both in the first post and in the present one. Oh yes, and to  all those who from time to time spare a moment to visit and comment on my posts.

You are used to see people walking towards you on the pavement. This afternoon, it strikes me as curious that, instead of a person, coming down the middle of the footpath, with dignity and deliberation,  it is a single rather plump wood pigeon. As I draw near it doesn't fly off, but instead turns sharp right and proceeds towards the front door of a house, as though  on an errand, to make a visit or leave a  card.
Posted by Unknown at 5:03 pm

I for one, look forward your observations and photos. Always find something, amusing, touching and/or
thought provoking, not to mention
inspiring.

Counting on you to continue.

such an accomplishment! Thank You.
i enjoy reading your observations. Long may you share with us.

Congratulations! You've given me great pleasure in your quiet daily observations, as well as meeting you and Heidi two years ago. May there be many more years of the same!