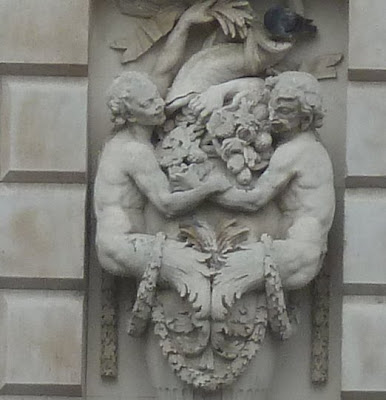 Lucy Kempton recognised the carving on the fascia of Somerset House which I posted the other day. She reminded me that she had included it in a montage which also contained a photograph of me. Such company! Here is another pair of friends perpetually side by side on the wall of Somerset House.

I like knowing the names of things, so when Bill Nunn, outside The Compasses, tells me that the fuchsia which grows wild in this country, particularly in the west of Ireland and in Cornwall, is called Fuchsia magellanica, I note it down. I have had one in the garden as long as I have lived in in Tunbridge Wells, but never known  its full name. I like it particularly because, although it was originally introduced as a garden plant, it  has accommodated itself well to our climate.  And without a fuss. It is above all a modest plant and refrains from the noisy excess of some less sturdy fuchsia which can be  found in garden centres, and as far as I am concerned can stay there. "Intelligence give me the precise name of things, so that the word can become the thing itself, newly made for my own mind and heart."

As I finish watering this afternoon I notice steam rising from the paving stones in the hot sun. It has certainly warmed up since yesterday. The land drops away at the end of the garden where houses intervene on the slopes of a steep valley. On the far side among the trees I see that someone has lit a bonfire. The smoke resonates with the brief skein of  steam.
Posted by Unknown at 5:47 pm