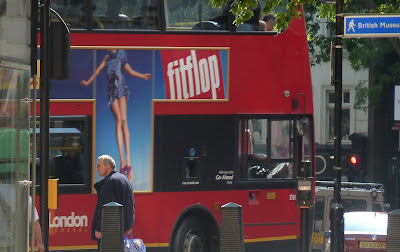 In London wherever you point your camera messages abound.

Unopened bouquets of flowers  left by the wayside are always a sad sight. Often they are left  at the site of an accident  or in a place with sentimental associations, to form a spontaneous shrine of some sort. But the  lone bunch of lilies, still in its cornet of florists' wrapping paper, under a sapling in The Grove, seems to have a less solemn explanation. The flowers are scarcely visible; no message accompanies them; and they are pointing away from the path. They  appear to have been thrown there violently or without feeling.  Perhaps they are a rejected gift of the kind often featured in soap operas to signify an apology not accepted, or a failed attempt to reestablish a broken relationship.There must be a story there.

Garden peas have always been a problem for me.. In the past, mice have eaten the seeds (or so I am told to explain the absence of any sign of germination). Or if the seeds have germinated, pigeons have eaten the tender shoots. This year I have sown the seeds in trays in the greenhouse and transplanted them when they have sprouted.  Today I transplant a second batch of seedlings and arranged pea sticks above them. So far the experiment has been successful. Next year I will try planting the seeds, as I have been advised to do, in a strip of plastic guttering and slide the seedlings with their compost into a prepared trench.
Posted by Unknown at 4:51 pm

I like the photograph which seems a collage of various elements caught in the frame, visual and verbal puns in one go.
The description of the discarded flowers is also photographic, the words as if interpreting a photograph. I can see those lillies so clearly!