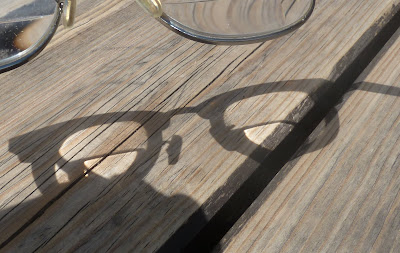 Sitting outside the pub I enjoy the texture of the scrubbed table and the shadows thereon.

There are two ways of ascending Mount Pleasant from The High Street and the  railway station. One is via the street called Mount Pleasant, which has several restaurants, fashion shops and hairdressers. The other is via Mount Pleasant Avenue, a narrow, relatively featureless street, parallel to Mt Pleasant. Here, on the left as you walk up the hill, you find the rear of the shops, and often see chefs and waiting staff and the odd hairdresser, having a quick puff of tobacco on a doorstep. You also catch a whiff of  the restaurant kitchens, Italian sauces, Asian spices, grilled meat. It's a climb that sharpens the appetite, particularly when you are on the way to the Farmers' Market outside the civic complex on the crest of the hill in search of culinary inspiration.

I have reached the last page of my current notebook, which will join the stack of nine moleskins beside my desk. The early ones in the pile largely contain drawings sketched usually on the hoof or sitting at restaurant or pub tables. I have gradually switched the emphasis from graphics to words.  Most of the books have lasted nearly a year. The present one has a date, 28 August 2010, on the first page  (I should clearly have dated earlier ones, but I  used to underestimate their value as a record). The first words are "house martins". This summer there are again house martins to be seen flitting across the sky in the space between the top of our hedge and the eves of the house where the martins nest.

We have a Farmers Market here in town, open on Saturdays. There are a few food stalls among the mostly fruit and vegetable stands. I love walking into the building. The pretzel lady makes pretzel-dough encased sausage links for the early shoppers, and there is a coffee bean merchant who has three of four different coffees brewing, just around the corner from the pretzel stand. The aromas there have the same effect on me as your shops and cafes do on you.

Good to hear from you Martha. I have been thinking of you and wondering what is happening in your neck of the woods, in the absence of a post from The Crow, since May 28.

I was attracted by Moleskins (Capital or not? I once had some moleskin trousers and they could have led to confusion.) but I decided in typical West Riding fashion they were too expensive. Perhaps they were when compared with a school exercise book, but the cost is forgotten in the face of a collected pile of them. The expense, as it were, honours the effort. Perhaps I shall buy one and allow it to tempt me. I'd worry about my prose becoming lapidary, not that you appear to have succumbed to that failing.

Lapidary: that's a pretty silly adjective away from the trade that spawned it. In fact silliness is what I have in mind when I employ it. But does everyone realise this?

BB You are right to scoff a little and gently at Moleskin notebooks. Pretentious and oversubscribed they may be, but me, I like them, and have used them for long enough not to be embarrassed by them. Lapidary is a word hard to resist even though it is I fancy originally intended to describe a style of language suitable to be carved on tombstones.

Mole catchers of yore would sell the real mole skins to lead workers; it was the best material to stave off the inevitable progress of lead poisoning, while being fine enough to make gloves from.