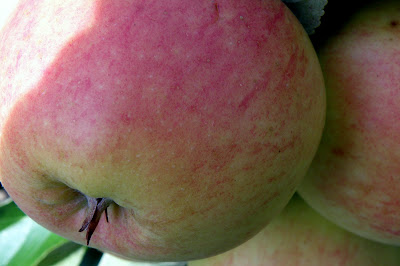 On the tree, which I planted and espaliered about 10 years ago apples cluster. They are James Grieves, an eating apple with a pleasing acidity, a variety unobtainable in supermarkets.

Outside The Compasses, Geoff reminisces about his childhood in Liverpool in the Sixties. There was a fish and chip shop on the way to my school. My Mother used to give me a stack of plates and towels to leave at the chippies. The chippie would keep the plates and the towels in the oven. On my way home I'd pick up the fish and chips kept hot by the towels and hot plates. We weren't the only people who did this. The chippie had about 200 sets of plates and towels and knew which every one belonged to."

On a shopping bag beside a woman on a bench in The Grove, I read "There is no love sincererer than the love of food." An interesting and cynical slogan I think to myself. It is untrue even of animals. The look in the eyes of a dog or cat when food appears  is  closer to lust  than  to love. And the saying that the best way to a man's heart is through his stomach, is one of those half truths which end up by irritating like the slogan on the bag. The slogan incidently is qualified by the bag's provenance, M&S, Marks and Spencer, a chain which has a vested intererest in the sentiment.
Posted by Unknown at 4:55 pm

The dreadful disappointment of the aphorism. It catches your eye, you say "Hmmm." but if you're wise you pass on quickly. Two or three seconds and you start testing and you're left with a handful of meringue crumbs. The aphorisms that stand this test are usually less flashy, the author less visible. Needless to say, none comes to mind at this moment. No, how about "The way to hell is paved with good intentions."? But only if one acccepts that that road has other paving stones as well.