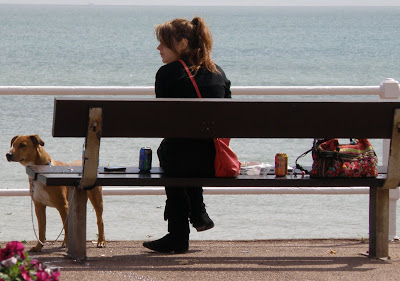 Bench by the sea.

Earlier this summer I found that pigeons had taken a liking to a particular variety of lettuce - the crisp sort with big, cabbage-like hearts sometimes described as "iceberg" - and cropped the tops of the seedling almost as soon as I had set them out. I resolved to take no notice of the attacks and simply left the headless lettuces to their own devices. Today I note that my tolerance has paid off. Almost all the cropped plants have developed into satisfyingly plump and crisp vegetables to be proud of. I can't say  the same for the  green peas .The  pigeons virtually levelled the sweet and succulent shoots with their eager beaks. I can't say I blame them. Among the pea-sticks which I optimistically arranged  round them, I today managed to harvest, half a dozen pods - a poor reward but valued perhaps for their scarcity.  I shall cook them with a few of the remaining broad beans and few lovage leaves,  as served by the smart restaurant  where we lunched on Heidi's birthday.

This afternoon I feel the breath of freedom. In Grosvenor Precinct, I am approached by a young man in red tee shirt with words printed in white letters proclaiming a cult of some sort. He carries an ominous clip-board.  "This is the best way you can spend the next two minutes of your time."  He says adding "Let's do it."  "Let's don't," I say. and walk on, with a growing sense of relief, that I have saved two valuable minutes of my time for my own purposes and under my own direction.
Posted by Unknown at 4:43 pm

I admire your tolerance for the pigeons in your garden. I'm not quite that generous.

I appreciate your kindness and generosity to the pigeons.

And I LO V E your response to the pest in the red T shirt.

A perfect use for that otherwise under-used adjective: clipboards can be nothing but ominous.

M-l and CC It was only after I decided to be tollerant that the lettuces began to grow.

BB Remmber Betjeman poem, A Subaltern's Lovesong: "... And the scent of her wrap, and the words never said,
And the ominous, ominous dancing ahead.
We sat in the car park till twenty to one
And now I'm engaged to Miss Joan hunter Dunn."