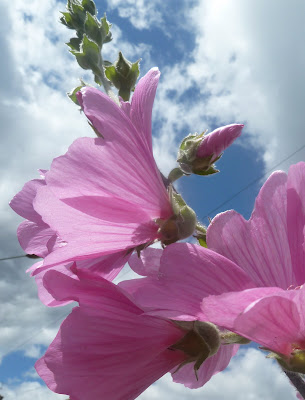 Lavatera or mallow in the wild.

There is drama in The High Street. A little girl wants to go into  the branch of Cath Kidston, a shop which little girls like. Her mother says, no. She screams and screams, and pulls away from her mother, but will not abandon her altogether. The mother waits patiently. The little girl goes on screaming at the top of her voice. The mother says very quietly, "if you ask nicely," but her daughter too far down the road of her remorseless longing, continues to scream. I am pleased to note that the mother does not give way. Gradually the two of them proceed up The High Street. The child's screams continue above  the sound of traffic, fading at last as they reach the roundabout opposite the station.

Two young men in a pub where we stop on the way back from France  are teasing the barmaid about her car. She is young, pretty, plump and blond. "Don't worry," she says to me, "they're locals." And then by way of further explanation, "it's my first car. It's mine. I paid for it, the licence and everything." "You must be proud of it, " I say. "I am," she says; "I've had it for just four weeks. It's safely parked where I can see it. Don't worry," she repeats, "they're locals."
Posted by Unknown at 5:04 pm

Nice little snippets of real life on the street and in a pub....

Your photo looks like a painting; lovely art, yet lovely doesn't say enough.