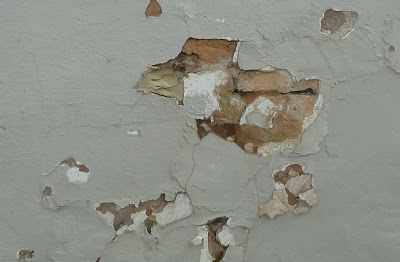 Plaster peeling from a wall.

In a sports shop window, I see a Frisbee and begin to think about the pleasure of throwing them, watching them in the air, and catching them. On my way home in Calvereley Ground, I see three boys  throwing a Frisbee to one  another. It is one of those Frisbees with a hole cut out of the centre so  that it resembles a ring. If I had a Frisbee it would one of these. Though more difficult to control its direction  of flight, this type of Frisbee has a life of its own. Throw it low and  it soars up like a glider in a convection current. Throw to someone and he will reach up  to  catch it and  will invariably misjudge its flight as it rise over his head as though it has a mind of its own.

In the pub this morning there is a bitter called Midsummer Madness. Going for a second one, I catch myself, making the sort of abbreviation that is common nowadays. "I pint of madness," I say.

There are days when I've one pint of madness too many.