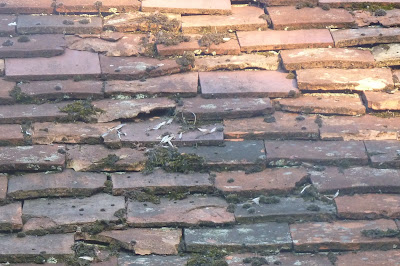 Evening sunlight on a roof of old Kentish clay tiles.

Pied wagtails are the commonest English wagtails. I love them for their joyful, swooping flight. In an art gallery in The Pantiles there are two made of gauze.The models are life size, and quite,  but not too realistic. There are two of them shown with a small mirror (they have been known to fly into windows attracted by their own reflection) in  a display cabinet. It is a coincidence that I have just read in Victor Hugo's novel The Man who Laughs, a description of an ourque, a small ship, a sort of barque, which comes from the Basque region of Spain.  "The ourque,"  he writes  is "among ships what the wagtail is among birds, one of the smallest and one of the boldest. The wagtail scarcely bends the reed on which it perches, yet flies across the ocean." Hugo's wagtail is likely to be the yellow rather than the pied wagtail because he later speaks of  ourques, even the poorest of them  as being gilded and painted to reflect the variety and colour of their country of origin.

My neighbours who take me shopping every week change their timetable today, to Saturday afternoon instead of Sunday morning. As I wait for them on the other side of  the tills it strikes me that it is noisier  today. Children shout  louder and run more wildly.  Their parents seem more frantic than usual as they drag the aisles.

I learn so much about English birds from your blogging.
Endured a bit of wild shopping myself yesterday. A hurricane has been announced, and knowing from experience how many Americans die from starvation during such storms each year (NONE), the stores were overwhelmed with crazed
shoppers stocking up for 2 days survival!!