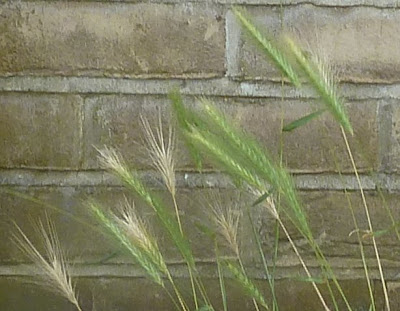 Grass growing out of the base of a wall and a crack in the tarmac of a footpath.

Nancy Wake, the New Zealand born, Australian bred French resistance leader, died the other  day aged 99.  She herself told the story that when she was parachuted into France in 1944, her parachute caught in the branches of a tree.  Not surprisingly, because she was apparently very attractive as well as talented, her rescuer said that he wished that all trees bore such beautiful fruit, to which her pleasingly direct and unsentimental response was: "Don't give me that French shit."

A security camera on top of a pole on the  St Leonards sea front, rotates through 45 degree every few minutes. I am watching a seagull perched on the camera when the camera moves. To my surprise the bird merely the lifts its feet and lands elegantly as the camera takes up its new position. An established  and rather enviable relationship between bird and machine.
Posted by Unknown at 5:49 pm

All lovely images, with a chuckle emerging from the second.

What I like about this photo are the contrasts: line, texture, color, state of being. I find this study of contrasts very appealing.