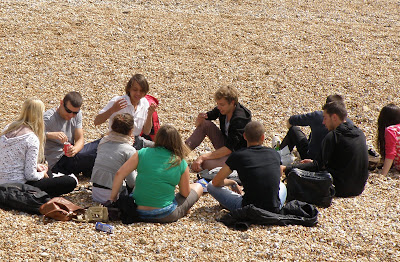 Circle of young people talking on the beach.

Sometimes Montaigne, that most civilised of commentators makes me gasp with joy when he writes something which seems as true today as  when he wrote it 500 years ago. His essay on the education of children is full of such judgements. "The boy," he says, "will be trained to be sparing  and thrifty with his ability when he has acquired it; not to take exception to the stupid things and wild tales that will be told in his presence, for it is uncivil and annoying to hit at everything that is not to our taste...He will be taught not to enter into discussion or argument except when he sees a champion worth wrestling with, and even then will not use all the the tricks that can help, but only those that can help him most. Let him be fastidious in choosing and sorting his arguments, and fond of pertinence, and consequently of brevity." Oh how I love Montaigne!

In The Grove four young magpies hopping in the grass under the trees. They must be newly fledged. The are small and seem reluctant to fly. One's sorrow, two's mirth, three's a wedding, four's a birth..."

One for sorrow, two for joy, three for a girl and four for a boy. Five for silver, six for gold and seven's a secret that's never been told.

Although the thought of magpies keeping a secret...

Thank you for our vegetables, oh constant gardener.

Over here, I've heard the poem as being for counting crows.

In fact, the first line, "One crow for sorrow," is where my blogonym comes from.