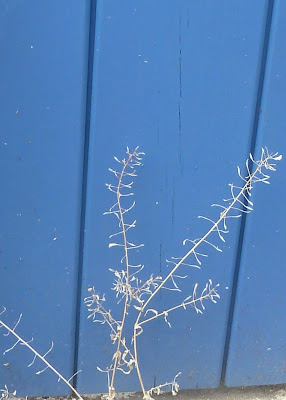 Skeleton of a weed against a blue door.

We hear from a restaurateur of our acquaintance of his disagreement with his teen-age daughter. "She's gone back to her Mother," he says. "She was staying with me. She said that she wanted a nose-stud. I said that I wouldn't allow it. She said that she was an adult. I told her so was I. So she went back to her Mother. Her Mother allowed her to have one nostril pierced. She came back to me and said she wanted to have the other one done. I said no. I said that I could not acknowledge her as my daughter with two studs in her nose. She had it done anyway. That was it. She's back with her Mother now".

A fox cub stares back at me over the fence from the wilderness next door to the vegetable garden. He is only a few feet away. He is as interested in me as I am in him. He is in no hurry, turns and walks off, then stops and looks back at me. I reach in my pocket for my camera. Too late: off he trots, leaving behind a strain of regret, a perpetual ache for the wild.
Posted by Unknown at 4:09 pm

I love the last line.

Very sorry you missed the photo, but you
painted a charming picture in words.