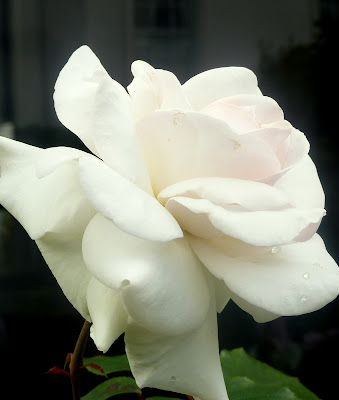 Sometimes a rose shows itself irresistible when we sit in the garden in the evening. So I can resist neither snapping it nor posting the photograph.

There are now two sorts of lettuces ready for cutting in the garden. One is the soft, more tasty variety, which except for a close knit heart, tends to be floppy. The other is all heart, almost like a cabbage, crisp but with little flavour.  It makes me think of my old friend Bob Payton, an American advertising executive resident in London, who launched a restaurant called the Chicago Pizza Pie Factory in Hanover Square, back in the seventies, when pizzas were a rare thing in London. He used to mock European lettuces for their lack of crunch, and did so once memorably on television. He was dedicated to the crisp but almost flavourless iceberg favoured in his native land. How wrong he was! Lettuce to my way of thinking should taste green and slightly bitter with just a hint of sweetness and be soft to the touch as well as possess a heart with just a hint of crunch. But I miss Bob nevertheless, whose imagination and wit showed itself in his considerable success with restaurants. The Chicago Rib Shack in London followed and mirrored the success of the Pizza Pie Factory. He was killed in a car crash in 1994, having by then turned an English stately home called Stapelford Park, into a country house hotel.

There is a bed in the vegetable garden devoted entirely to herbs, many of  them unusual. One of the successes this year, if success can be judged by sturdiness, is wormwood, a herb which I had heard of but never seen .   Its  Latin name Artemesia absinthia gives away its connection with absinthe the drink which was reputedly the undoing of many Parisian writers and artists in the 19th and 20th centuries. One of its ingredients, santonin, is said to hallucinatory and to have been the cause both of herb's attraction and its lethal effect. I can personally vouch for neither of these, but admit to liking the plant's silvery leaves and bell-like inflorescences.
Posted by Unknown at 10:38 am

Lovely rose. The dew or are they rain(?) drops are like tears.

I have drunk absynth (now legal in Britain) only once, and can confirm that it is unlike any other aloholic drink I have ever had. It was a very strange experience. Nuff said.

I went to the Cicago Meat Packers where I ate a huge onion loaf. For a bet, I successfully ate another. I met Payton (with you I think) - did an interview as I ate at CMP and I believe the article appeared in CHK. The onion-loaf bet was post-mortem Payton but I like to think he would have approved.

BB You interviewed him before anyone else after the launch of the Pozza Pie Facotry. That sub called Alan Gayfer, threw the press release announcing the launch into the wastepaper basket, and the photographs! I rescued it I rememeber.
Payton came down to stay once with his wife, and their very old and large and heavily medicated dog which had to be carried up stairs.

I have many fond memories of The Chicago Pizza Pie Factory from the late 70's and early 80's. I also ate at the rib shack, meatpackers and Henry J ~Beans. Met Bob a couple of times. He is sadly missed and his brand of enterpreneurship !