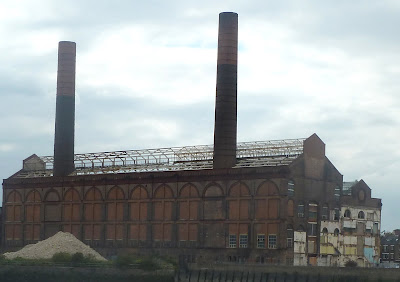 Lot's Road power station, where the electricity for the London underground used to be generated, photographed from the South side of The River Thames, beside St Mary's Church Battersea, where the poet William Blake was married.

In Sutherland Road which leads to The Grove, there are two houses almost facing each other, which have prolific lavender hedges in front of them. As I walk past the scent of the flowers is powerful,, quickly to be succeeded by the smell of curry from the Indian restaurant in Grove Hill Road.

This summer I have taken to making sausages with minced lamb and spices, a variation of kebabs, which are grilled on the barbecue. I have found that by pounding the meat with the spices (I use Moroccan spices, usually the blend known as harrisa) in a mortar, there is is no need to add an egg to hold the mixture together. The meat is then rolled into a sausage shape in cling-film and left in the fridge. Before grilling the film is removed and the meat placed on the grill. I believe that in the Balkans such "sausages" are known as "kebabcici" or something of the sort. The scent of the meat cooking is what must have pricked the nostrils of the old gods on Mount Olympus.

Say Lots Road and the name of Roy Brooks, estate agent extraordinaire, is evoked. Remember his outrageous Sunday Times ads for houses and flats in the Chelsea area: "Structure a wreck. Coal in the bath. Horses stabled in the kitchen. Try ANY offer." So many of the places he sold were on and around Lots Road, which he identified, quite correctly, as one the nastiest thoroughfares in London. Wonder if he ever sold any of these properties?

You Olympians are all the same !

The scent of those sausages so well described here, have tickled my nose and made me hungry. Yum!

What a wonderfully olfactory post! Reminds me a bit of this one of Luisa Igloria's...

BB I remember Roy Brooks' ads, compulsory reading. You had the feeling that just by being honest he succeeded in selling the most unsalable of properties.

CC Sorry, I wish I could send you some on the wire.

Lucy Her poems are so good that I would not dare to think of anything I wrote in the same category, but the comparison is flattering.