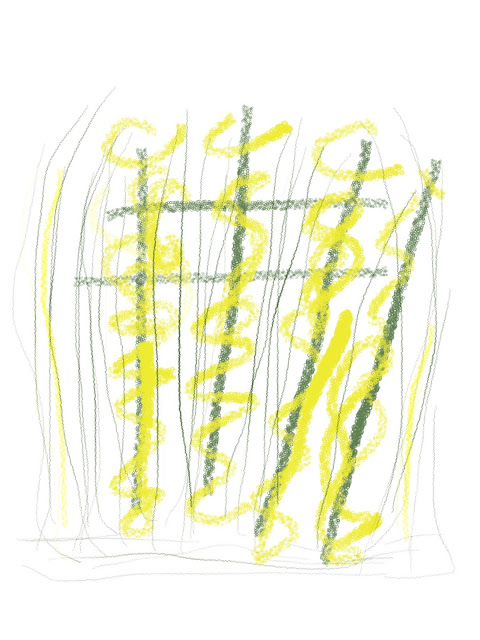 Meditation  on the yearly cycle of climbing plants. As I remove and stack away last years beanpoles I think about the beans I will grow this year.

Among the plants pushing up their shoots  in the herb garden  at the moment is wormwood, a handsome and vigorous herb for which I have little use other than the pleasure of its company. It has of course some interesting associations as its botanical name Artemis Absinthium attests. For it is the basis of the notorious absinthe which had so dramatic affect on the lives of  poets artists in France at the turn of the century who became adicted to the drink. But it does have benign applications. The Greeks infused their wine with it to make it less intoxicating and  it is remedy for weak digestion. Hippocrates believed that it stimulated the brain and could restore disorders there. It was dedicated to the goddess Diana.

Two models lurk somewhere at the back of my mind as I write this daily blog. One of them is the great Montaigne who invariably and on his own admission wrote about himself. But he wrote with an analytical  detachment, honest and amused, which removed his essays far from the egoistical. Rather they are rich accounts seen through  the spectrum of his own personality, of human nature in general. My other model is  the naturalist Gilbert White whose Natural History of Selborne describes with  vivid precision the wild life which surrounds the village of Selborne in Hampshire where he was curate to wards the end of the Eighteenth Century.