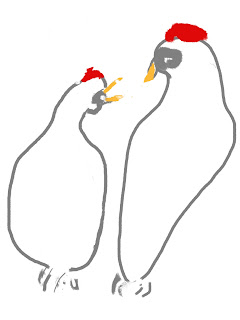 Birds are on my mind today. I tweeted this too.

All sorts of building components are lying about the once deserted garden next door to my vegetables. To discourage the weeds - specifically ground-elder, buttercups, nettles and bindweed, which they shelter rather than discourage -  I today  pile layers of leaf-mold against the fence to smother the roots as they attempt to invade.

The monotony of the minimalist composers of the the 20th century has long appealed to my uneducated ear. And I suppose to my tolerance of repetition.  Last night the BBC 4 programme on Twentieth Century music, The Sound and the Fury, reminded me of what for many may seem an odd preference. I am not sure how long I could sit in a concert hall and listen to  one of the works of John Cage unless it happens to be 4' 33''. Not too long to remain silent in the absence of sound.  But my taste for for the likes of Philip Glass and Steve Reich is strengthening. This morning with the the sound track of the programme  still in my head, I play my Philip Glass album which includes pieces from Einstein on the Beach and something rather lovely and soothing called Etude No 2 for Solo Piano. Hey, music lovers I'm not boasting or even recommending, merely reporting with a hint of apology to  Tone Deaf which would know better how to deal with my crush.

I'm enjoying your tablet drawings, Joe, and this one is delightful. I'm sure you are aware of David Hockney's work done on an iPad and exhibited not so long ago.