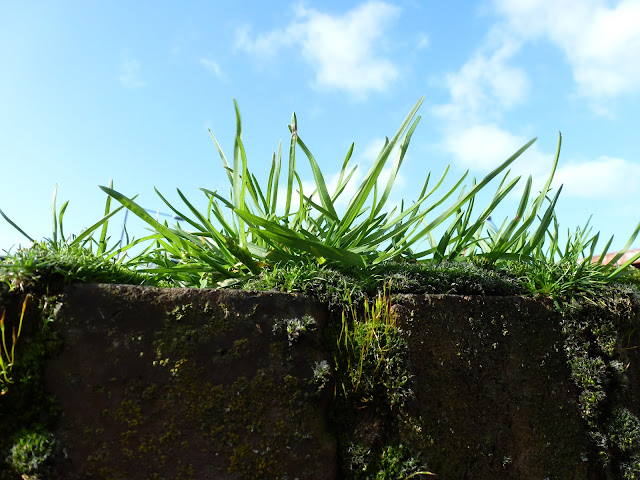 Grass and moss growing on top of a wall above the railway station.

It must be at least 20 years ago that I first tasted pimientos de Padron in a tapas bar in Galicia in north west Spain. They are about the size of an average chilli and could be mistaken for one if it were not for the fact that they do not have the heat of chillies. Grilled and served with salt they taste as you owuld imagine chillies would if they weren't hot. A delightful experience. You are warned though as you eat them that every now and then you might find a hot one, but it is never embarrassingly sharp. You very rarely find them in England but here is a packet of them in Sainsbury's vegetable department. Grilled with Maldon salt served with a slice of ham they are for lunch.

Above a men's outfitter framed in the window is a man in his shirt sleaves being outfitted.  In a split second as you look up he raises his arm and you see the outfitter lift  a measure to it and to the spread of his shoulders.
Posted by Unknown at 4:17 pm

I have been on the hunt for signs of spring and here you have presented one! The angle of the photo is delightful, too. Do you suppose that's what a badger might see, digging its way out of its den?