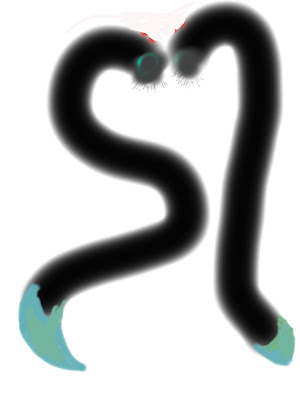 Challenge or encounter? Composed with Brushes.

In a novel by Philippe Djian called Erogenous Zone the narrator says,"Stupidity alone does not explain why I sit like this glued to a chair. What drives me to write  all day and a good part of the night  is that  something far more terrible is not to to be writing."  Reading this made me think of my friend RR , who has written three novels including the recently published Gorgon Times in the last two or is three  years, with the same sort of single-mindedness. While I cannot match such dedication, skill  or energy, I completely understand the need to be creating something, even something tentative and unsure of itself on a daily basis. Hence I suppose this blog.

When I was at school I remember distinctly finding it difficult to understand the expression "to beg the question" which used to mean, to answer another question while ignoring the one you are supposed to be answering. Though when I did eventually grasp its purpose,  I took pleasure in using it because it was an apt description of a common behavioural lapse.  In my lifetime and quite recently  the expression has come to mean (judging by its wide use or abuse, to pose or ask a question - a clumsy and above all unnecessary phrase far removed from its original intent. A sad decline in language it seems to me.

Thank you for that kind reference. I don't think our finished products profit by comparison, what matters is we both need to be writing. And these days I can spend most of my "alert" time (ie, between 06.25 and 09.00) writing a 200-word comment to someone's blog when I should be re-writing Blest Redeemer. And if I need to justify this I can turn back to a long-forgotten post in Works Well and note with shame some over-wordy, over-clever re-comment I made which I must now accept it as part of that other compulsion "to get things right".

"beg the question". Once it was all clear in my mind. Now writers of some stature mis-use the phrase to the point where I have dropped it. Apart from worrying about whether it's going to be read for its correct meaning, there arises that other, vaguer concern of "motive". Once it was smart to use it possibly because of its ambiguity. Now ambiguity appears to outweigh the sense. To some extent the phrase has been replaced by "elephant in the room" but that is more clumsy to manipulate and more demonstrably a cliché.

Like RR, I avoid the expression. I've never been quite sure how to use it properly, but know that it is commonly misused and don't wish to do so. Your definition is helpful but I still can't imagine using it confidently.

I think in the past I've sometimes understood and maybe used it in the sense of posing a corollary question, spoken or unspoken, as in

But that is still not the correct use, so it's best left alone.

Selfishly I am glad that you spare the time to comment on blogs. Meanwhile from your point of view I have always thought that secondary activity can possibly serve to stimulate the primary one. The novel I have been reading strikes me as an accurate account of the persistent, hard work involved in writing and correcting and rewriting, while trying to balance the distractions of the rest of life.

I had not thought about that bloody elephant. But of course it had to butt in as it always seems to. In my view it is a poor substitute for "begging the question" of which as I indicated I had become quite fond when I discovered its precise application, and before it became a vapid substitute for " asking". As for the elephant that's something else isn't it? Introducing something irrelevant and inelegant.

Lucy and RR. My understanding of "begging the question" it that it applies particularly in discussion when someone ignores
the main thrust of an argument, and responds to another strand of it, thereby deliberately or inadvertently missing the point. When I eventually came to realise that people do frequently beg the question I saw that it was, unlike its current misuse, a valuable, and accurate description of what occurs in conversation and very hard to replace.

"elephant in the room". A prominent probably embarrassing subject that everyone is failing to acknowledge or refer to. Or have I got that wrong, too?

I think you're right. But I suspect that neither you nor I would use it because it has become so much of a cliché as distinct from a fine tool of the English language.

I shall now look out for instances of begging the question.

I had the same sense of satisfaction when I learned of the term 'the straw man fallacy' as describing something that occurs a lot and which is very annoying when people do it, but which previously I didn't have an expression for. It makes for a quaint verb too, 'You are straw-manning me', which is probably bad usage but stops'em in their tracks anyway.

The elephant in the room is odd, since if there was one it certainly wouldn't be ignored, but perhaps it pertains to a story since forgotten, and only the expression remains like a geological stack...

Another elephant one which hasn't gained universal currency but which I like is 'the elephant in the distance'. That's when, for example, you agree to do something which will be a large and troublesome undertaking, which you wouldn't take on if it were tomorrow, but because it is still a long time in the future, doesn't look so big. But the elephant in the distance is still elephant-sized, though it look small from here...