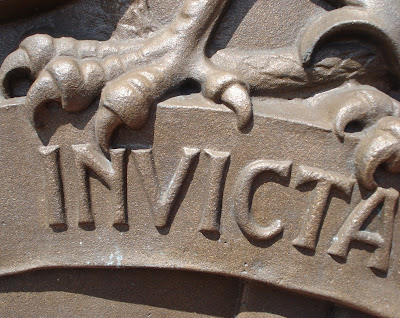 Part of the coat of arms on the bridge which takes the road over the platforms of Tunbridge Wells railway station. It reads in full Onward Invicta. It is the insignia of the South Eastern and Chatham Railway, a company now long forgotten. For anybody who cares about such things, the company once owned two cross-Channel ferries linked to its railway, called Onward and Invicta.
.
Someone has planted a runner bean in a pot beneath the railings of a front garden, where it is, as I write, busy climbing.
.
A telephone engineer attends one of those boxes on the pavement, where telephone lines meet in a tangle of wires. It has both its doors wide open as a group of grey haired tourists approach inspecting the architecture of Mount Sion. The engineer steps aside to let them pass. Their eyes raised to rooftops and architraves, the tourists do not notice the wires, nor do they hear the voices of those who still rely on landlines.
Posted by Unknown at 1:54 pm

Proof that Barrett Bondism isn't an incipient condition. I have a theory about those BT engineers. They deliberately open the door of those terminal boxes wider than is necessary, fully revealing the cat's cradle within. Saying: Look I can handle all this, whereas you'd run a mile.